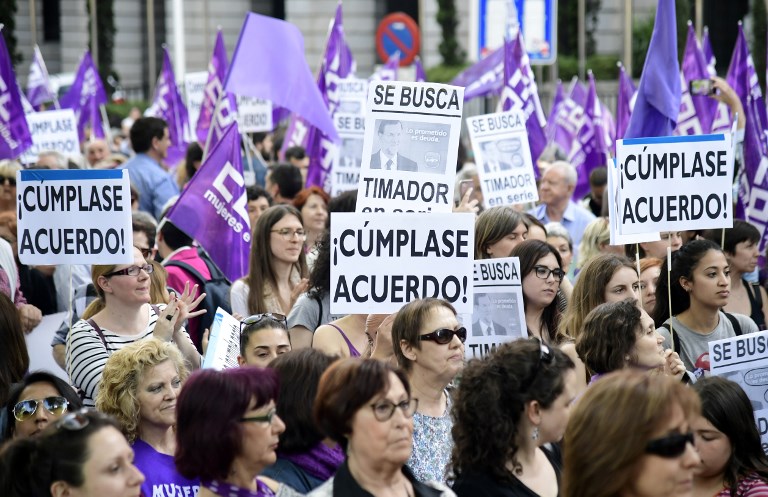 Hundreds of people took to the streets of Madrid and Barcelona on Wednesday to demand the Spanish government fulfil its promise to finance an ambitious plan to fight domestic violence.

“There is no lack of money, there is a lack of will,” the protesters chanted in Madrid as they made their way from the equality ministry to parliament.

The protesters demanded the government’s budget for 2018 include an annual increase of €200 million ($238 million) in spending on efforts to end domestic violence that was pledged in a state pact against gender violence agreed to in December.

While the protests were backed by Spain’s main unions, they were far smaller than recent demonstrations against the controversial acquittal of five men accused of gang-raping an 18-year-old woman at Pamplona’s bull running festival.

The men were sentenced instead to the lesser charge of sexual abuse.

Health Minister Dolors Montserrat in December called the pact against gender violence a “historic agreement” which includes more than 200 measures “to end this scourge”.

At the time she promised one billion euros in extra funding over the next five years to the cause.

A protester holds a poster with a photograph of Spanish Minister of Health, Social Services and Equality Dolors Montserrat during a demonstration in Madrid.

“This government is unpresentable, it has the habit of promising and then not fulfilling,” said Maria Sanchez, a 68-year-old pensioner in Madrid.

She told AFP that she came to the march on behalf of her two daughters and two granddaughters.

Jimena Manteca, a 22-year political science student, said women had “woken up and we are not going to be silent”.

Domestic violence is a high profile issue in Spain and each death gets intense media attention, with parties across the political spectrum having vowed to stamp out the problem.