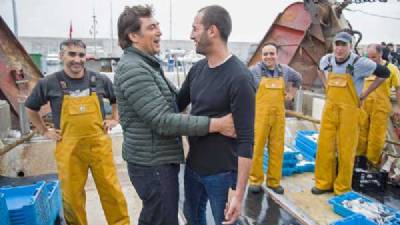 BOND villain Javier Bardem has been out sailing off the shores of Catalunya to collect plastic waste from the sea – partly to help out, and partly to raise awareness of the problem.

Bardem, who is married to Almodóvar Girl-turned-Hollywood regular Penélope Cruz, went out from the port of Blanes (Girona province) and all the plastic waste he scooped out of the water will be sent to a company which melts it down to make sunglasses.

The Skyfall ‘baddie’ has helped promote several environmental campaigns, including the one Greenpeace is currently running in the Antarctic.

And he was horrified by what he saw when he took part in the plastic-clearing exercise in Blanes.

“We’ve only been out for a couple of hours, but we cast the net and you wouldn’t believe what got caught up in it,” Bardem said as he got off the boat on his return to Blanes port.

“Everything from balls to mains water pipes, flags, bottles, golf balls and old fishing nets – stuff that takes over 300 years to biodegrade.”

Bardem’s involvement in the plastic mission came through his working with the brand Chivas, which is running a scheme that gives financial benefits to companies which come up with ideas that make a real difference to the world.

In Spain, the Chivas award went to the firm Sea2See, based in Barcelona and run by Belgian national François van den Abeele.

Sea2See strikes deals with fishermen who dump plastic waste they catch in dedicated banks, which the company then uses to make sunglasses.

Van den Abeele says his firm is based in around 30 ports in Catalunya and fishermen in each collect around a tonne of plastic waste a day.

He recently bought 25 tonnes of plastic rubbish from France, and has been receiving calls from ports across northern Spain asking him to set up there.

Bardem (pictured left) was keen to use his name and face to help promote Sea2See, and was disheartened to see the extent of the plastic issue.

“We’re addicted to its constant, daily and massive use,” Bardem said.

“Everything comes in plastic, even disposable items designed to be used once, which is unnecessary.

“And that’s the society we live in, but we need to think about how we can redirect this because what we’re doing is just not working; we’re generating tonnes of unuseable material which is highly toxic.

“Fish are eating it, and as a result there are sea creatures which are not growing and not reproducing.

“The situation in the seas is dramatic, and yet our oceans are of vital importance – as habitats, and in relation to climate change – so we need to fight to prevent their deteriorating.”

Bardem cites the now well-known statistic: that by the year 2050, or just 32 years from now, there will be more plastic rubbish in the sea than fish.

“It might sound like science fiction, but the fishermen I’ve just been out with – who see the reality of it every day – say it’s true,” Bardem insists.

Among other campaigns he supports, Bardem – who won an Oscar for his role in No Country for Old Men – is working on one launched by Chivas to try to wipe out use of plastic straws and disposable cocktail-shakers worldwide.