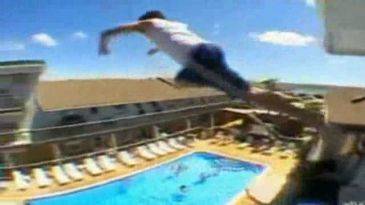 BRITISH authorities have made a video with the help of a Spanish doctor in a bid to combat the foolhardy practice of ‘balconing’, which claims and destroys lives every year in popular Balearic Island resorts.

Dr Juan José Segura Sampedro, 33, is based at Mallorca’s Son Espases hospital and sees the results of ‘balconing’ stunts far too regularly.

He treats between 10 and 15 holidaymakers a year who have fallen whilst trying to jump from their terraces into the swimming pool below, or from balcony to balcony.

Some of them do not survive, and others suffer serious head and neck injuries with irreversible consequences.

Those who survive ‘balconing’ falls are frequently left paralysed from the neck down for life.

Son Espases’ research shows that 61% of holidaymakers killed or injured in ‘balconing’ falls are British, the average age is 24, and 97% of them are male.

In 98% of cases, those injured or killed whilst ‘balconing’ were extremely drunk.

Typical cases tend to be ‘boys of around 19 or 20’, says Dr Segura Sampedro, a trauma surgeon.

He says last summer in Mallorca alone, three holidaymakers aged 16 to 30 were killed in balcony accidents.

Deaths and injuries are not only caused by daredevil stunts, but by attempting to climb across to neighbouring balconies, perhaps those of rooms where friends are staying, rather than using the corridor or waiting to be let in the front door.

The most recent balcony fall death was a 19-year-old woman who locked her keys in her room by mistake and tried to climb in via the terrace window, but slipped.