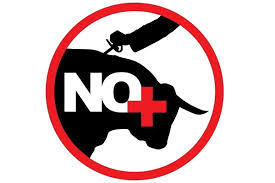 Shocking footage showing the suffering of a Spanish fighting bull during a fiesta in eastern Spain has renewed calls to ban bullfighting and related activites.

Footage captured during the “bou al carrer”, a traditional running of the bulls in Villa Real near Castellón in the Valencia region of Spain shows an animal having some sort of seizure during the event on Wednesday, May 16th.

The bull is seen running along the designated path through the town surrounded by spectators when he falls to his knees and then collapses onto the ground.

The half-tonne animal is seen in visible distress as it repeatedly bashes it head and horns on the tarmac while its body writhes uncontrollably.

The crowd can be heard whistling in anger as the bull no longer was able to run.

Oblivious to its plight, a spectator rushes forward and pulls the animal’s tail in an attempt to get him on his feet and continuing on its path.

But the animal once it gets to its feet is clearly disorientated and unable to run. Experts suggested that the bull was suffering some sort of damage to its central nervous system, perhaps after slamming heavily into a barrier or wall earlier in the run.

Seeing the images, José Enrique Zaldívar, the president of AVATMA, an association of vets lobbying against bullfighting and animal abuse suggested that the animal had “suffering some sort of damage to its central nervous system”.

“It is possibly due to a head injury, perhaps caused by crashing against the safety barriers protecting spectators along the route”.

He said that the video is proof that “even those spectacles that don’t involve blood such as bous al carrer also bring intense suffering for the animals”.

The image was released as protestors prepare to take to the streets later this month to demand an end to bullfighting and taurine entertainments in Spain.

The demonstration has been called for Sunday May 27th in Madrid’s Puerta del Sol by Tauromaquia Es Violencia (TeV), a coalition of national and international organizations that fight against mistreatment and for the rights of animals.

The group estimates that around 20,000 fighting bulls are used in taurine festivals across Spain each summer.

Although hundreds of bullfights and bull-related festivals take place across Spain each summer, there are growing calls to ban it for animal rights reasons.

Catalonia introduced a ban on bullfighting in 2010 for animal cruelty reasons but the law was overturned by Spain’s Constitutional Court last year.

Support for bullfighting has waned in recent years with demonstrations against the tradition regularly attracting thousands of participants.

The only other Spanish region to have successfully banned bullfighting is the Canary Islands, though Castile and Leon in Spain’s northwest abolished the killing of bulls at town festivals in 2016.

The Balearic regional parliament has voted in a raft of new measures that overhaul bullfights and ensure that no animals are hurt in the spectacle.

Several cities have also put a stop to bullfighting or annual festivals with bull running over the years.

But other traditions with bulls continue to take place, such as placing flaming torches on their horns and letting the animals loose in the street.

Bullfighting was declared part of Spain’s cultural heritage in national laws introduced in 2013 and 2015 by the conservative Popular Party (PP) government of Mariano Rajoy.