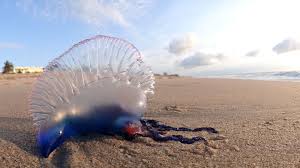 AN 11-YEAR-OLD boy was hospitalised after a potentially deadly Portuguese man o’war sting on the Costa Blanca.

Lifeguards had to pluck the stinging creature’s tentacles from the child’s arm.

He was said to be suffering from stomach and neck pain before being rushed to a clinic.

The boy was discharged after spending a few hours in the Elche hospital near the La Marina beach where he was stung.  And a red flag was raised on the beach to warn bathers to stay out of the waters.

A total of 75 miles of Costa Blanca’s coastline – popular with British holiday makers – has been closed off as the painful blue bottle creatures continue to wash up. Only one Alicante beach is said to be still open.

Revellers can still swim on San Juan beach which sits between El Campello, near Alicante and Pilar de la Horadada, south of Torrevieja.

Further south, Orihuela is also affected and the Town Hall said: “We ask you to be careful because of the presence of Portuguese man o’war on our coastline. They shouldn’t be touched.”

The most recent influx of the jelly-fish like creatures has not yet reached resorts in Benidorm or Denia, two hotspots frequented by British holidaymakers.

But Town Hall authorities did ban people from going in the sea at Altea beach, near Benidorm, last month. Authorities said the red flag was “a precaution.”