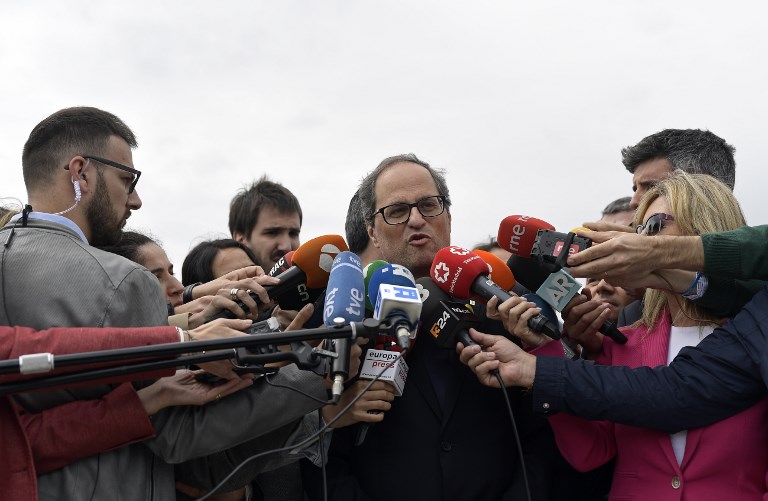 Catalonia’s new separatist president on Wednesday postponed the swearing in of his administration after Madrid rejected four regional minister who are in jail or exile over the region’s independence push.

Catalan president Quim Torra, who took office last week, denounced in a statement the “blockage exercised by the Spanish government” against his government and announced he had asked his team to “study the legal measures that can be taken” to solve the impasse.

Spain’s central government, which imposed direct rule over Catalonia last October after a failed declaration of independence, has refused to ratify the decree signed by Torra on Saturday to nominate his administration.

Madrid will only end its direct rule over Catalonia once a new regional government is in office.

Two are currently being held in custody just outside Madrid over their role in Catalonia’s separatist push while another two are in exile in Belgium.

Spain has asked for their extradition.

Conservative Prime Minister Mariano Rajoy, who considers the inclusion of these four ministers in Torra’s administration a “new provocation”, has ten days to publish the list of the new Catalan government in an official government journal, and thus allow them to take office.

But there is no guarantee that his government will do so even though Torra said in the statement that this is “an obligatory act”.

The row has prolonged the political impasse in the wealthy northeastern region of Spain, which has been without a government for nearly seven months.

Puigdemont and his government were dismissed by Madrid after October’s declaration of independence. Separatist parties once again won a slim majority of seats in the Catalan parliament in a December regional election called by Rajoy, capturing 47.5 percent of the vote.

Puigdemont is currently in Germany facing extradition to Spain for “rebellion” over his role in Catalonia’s separatist push.