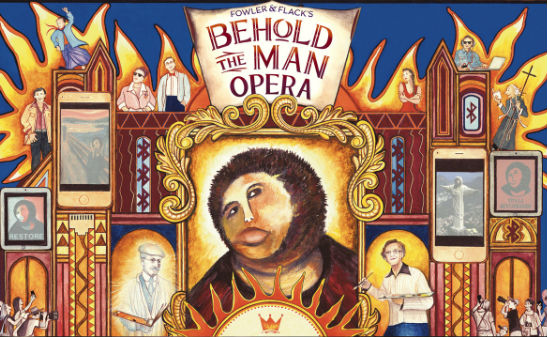 An opera celebrating the story of an octogenarian artist whose attempt to restore a fresco of Christ went disastrously wrong has had its US workshop premier in Arizona.

A full version of the opera was performed with an orchestra and full cast for the first time last week at the Arizona State University (ASU) ahead of what will be the World Premiere in Zaragoza in 2019.

The collaboration between librettist Andrew Flack and composer Paul Fowler has been five-and-a-half years in the making  and has the full backing of the now 86-year-old Cecilia Gimenez and the mayor in Borja.

It tells the story of how Giménez became an accidental celebrity in her home of Borja, near Zaragoza in August, 2014 and changed the fortunes of a town once crippled by the economic crisis.

Her bodged restoration of an image of Christ with a crown of thorns became the butt of a million jokes on social media and has put the town firmly on the map, attracting hundreds of thousands of visitors to the view it.

Described as a tragicomedy, the opera delves into the tale of how a devout woman with her good intentions and amateur brushstrokes transformed the mural from the serene original by Elías García Martínez into something resembling a hairy monkey with a smudge for a mouth.

The work explores how the ‘Monkey Jesus’ became an overnight internet sensation and how Giménez, initially, vilified and ridiculed, was transformed into the saviour of the town

Flack and Fowler teamed up with Brian DeMaris, director of the opera/musical theatre program at ASU to run the workshop which culminated in two live performances of “Behold the Man”.

“The primary focus (goal) of the experience was to allow Paul and me to hear the opera for the first time with a full orchestra. Up to this point, we’d heard the material only in concert settings, with singers and piano,” explained Flack.

A concert in the town of Borja in 2016 was one of three such experiences.

“Well, with the orchestra it was a revelation! A total and utter success thanks to 16 incredible musicians (drawn from the local professional ranks, along with a few graduate students) a cast of nine principal singers (mostly grad students and ASU alums) and a chorus of 12 (mostly current undergrads),” said a proud Flack.

“The week itself was like a kind of “opera boot camp.” Sixteen hour days of setting up and rehearsing. The singers had a total of ten days of rehearsal, and the orchestra four days to put it all together. And they did. How, I don’t know, given that we’re talking about 2+ hours of music…but they did, and beautifully so, too.”

The team hopes to take the opera to New York but will stage a World Premiere in Zaragoza next year to which they hope Giménez will be able to attend.

“She is doing well for 87, living comfortably in Borja within the city’s retirement community,” said Flack, who has travelled to Spain on numerous occasions while developing the opera to get to know the artist herself.

“She is such a lovely woman and is delighted with the opera,” he told The Local.