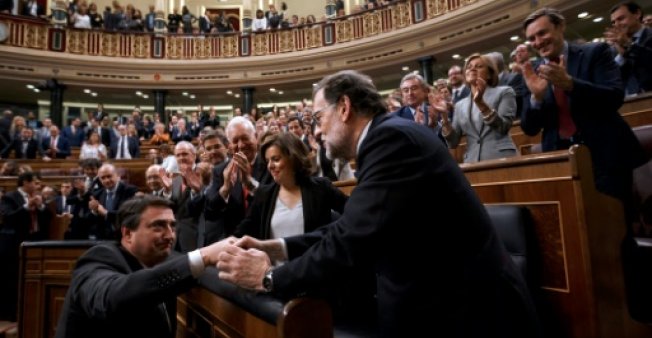 After months of suspense, Spain’s government finally got the guarantee it needed that the 2018 budget would be approved after a Basque nationalist party said Wednesday it would vote in favour of the spending plan.

The Basque Nationalist Party (PNV), whose five lawmakers are key for Prime Minister Mariano Rajoy’s minority government in a parliamentary vote on the budget scheduled for later Wednesday, said in a statement it had “decided, out of a sense of responsibility, to vote yes to the budget”.

Approval of the budget is crucial for the survival of Rajoy’s government until the end of its term in 2020 when the next general election is due, according to analysts.

But the PNV, which rules the northern Basque Country region, had for months threatened to withhold its crucial support unless Madrid lifted its direct rule on Catalonia imposed last October after a failed secession bid.

Rajoy is not willing to give Catalonia back its autonomy after the region’s new president Quim Torra named a new government that includes jailed and exiled former ministers who backed last year’s secession bid, a move the prime minister rejected.

The PNV, however, is deeply opposed to direct rule as it guards its own region’s autonomy fiercely.

But while it kept up the suspense until the last minute, it is in the party’s interest for the budget to be approved as it managed to persuade Rajoy’s Popular Party (PP) to include a significant pension rise in the spending plan.

The PNV, which has governed the northern Basque region for most of the past four decades, pressed the PP to agree to index the rise in state pensions to the inflation rate.

Tens of thousands of pensioners have taken to the streets of Spanish cities in recent months to demand higher pensions, with the protest especially large in the Basque region.