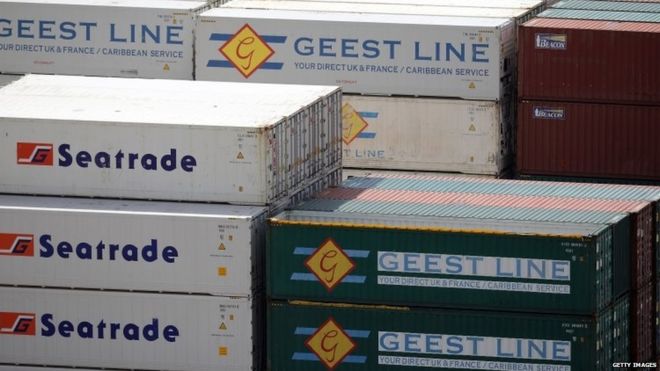 The post-Brexit customs system favoured by Boris Johnson and other leading Brexiteers could cost businesses up to £20bn a year, officials have suggested.

The chief executive of HM Revenue and Customs told MPs firms would have to pay £32.50 for each customs declaration under the so-called “max fac” solution.

Jon Thompson said any system may take between three and five years to bed in.

No 10 said the £20bn figure was “speculation” but “issues” remained with both options being considered.

The figure is higher than the £13bn UK contribution to the EU in 2016.

Leading Tory Brexiteer John Redwood said he did not accept what he described as the HMRC’s “general figures” but told the BBC that “if it is going to cost this much it is the wrong system”.

The UK is leaving the EU in March 2019, which is currently expected to be followed by a 21 month transition phase before the longer term post-Brexit system kicks in.

Ministers are currently considering two options to replace the existing customs union with the EU, which involves minimal checks, and which the government is committed to leaving.

Brexiteers are sceptical about what is believed to be Theresa May’s preferred option of a “customs partnership”, under which the UK would collect tariffs set by the EU customs union on goods coming into the country.

Their proposed alternative “maximum facilitation” proposal would rely on technology and advance verification to minimise, rather than remove, customs checks.

The EU has expressed doubts about whether either option would work.

During questioning by the Treasury Select Committee, Mr Thompson said that if ministers opted for the “max fac” solution this could cost UK and European businesses between £17bn and £20bn each year, reflecting the cost of customs declarations and complying with rules of origin requirements.

At the moment, UK firms exporting to other EU countries or importing goods from the continent are not routinely required to complete goods declaration forms.

Those doing business outside the EU must provide information about the type and value of goods, their destination and their tariff classification so that the right amount of VAT, duty or excise is paid.

Mr Thompson said there were about 200 million exports to the EU each year that could require customs declarations – and a similar number of imports.

Citing research by the University of Nottingham business school and by KPMG, he said the likely cost of individual declarations was between £20 and £55 – and while an average could not be authoritatively calculated, ministers had been advised a figure of £32.50 was plausible.

Payments on either side of the border could cost £13bn a year in total while it was “reasonable” to assume any rules of origin requirements demanded by the EU could add “several billion pounds”.

“You need to think about the highly streamlined customs arrangement costing businesses somewhere in the late teens of billions of pounds, somewhere between £17bn and £20bn,” he said.

“And the primary driver here is the fact that there are customs declarations.”

In contrast, he said the customs partnership option – which has been described as “crazy” by Boris Johnson and “flawed” by Michael Gove – would cost business a maximum of £3.4bn a year – depending on how much firms chose to claim back in differential tariffs.

It would, he said, take between three to five years to fully implement any new system after Brexit.

What are the UK’s customs options?

While a “functioning border” was possible by the end of the transition period it would not be, in his opinion, be “fully optimal”. But he said no new customs infrastructure would be needed in Northern Ireland.

Mr Thompson declined to answer when it was suggested it would be easier if the UK just remained in the customs union – a solution favoured by business but rejected by ministers.

Former Conservative cabinet minister John Redwood said the starting point for any new customs system should be existing arrangements for importing goods from outside the EU.

“We have a perfectly good functioning trade system with the rest of the world at the moment,” he said. “It does not cost anything like these figures.”

The UK, he said, already had a VAT, excise and currency border with the EU based on pre-registration and electronic declarations which, if necessary, could be extended.

“None of these happen physically at the border any more with a man or a woman in a kiosk having to work it out with the lorry waiting.

“It is all done electronically away from the border with electronic manifests and computer registration… If we have to do customs dues as well it is not a greater increase in the complexity.”