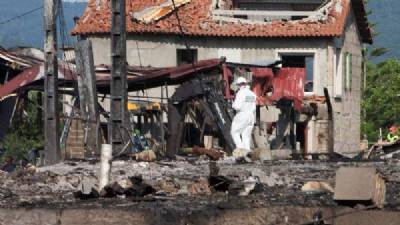 THE two residents killed in the Tui firework storage explosion have been named – a mother and father, who have left two little boys orphaned.

Abdelkhalek el-Bouabi Hailas, 56, an ex-Armed Forces pilot, and his wife Ezzoura Bouadel, 45, had lived in Spain for 11 years and eked out a living by running market stalls – in fact, Abdelkhalek supported his children from an earlier marriage back in the family’s home country, Morocco, from his earnings.

They owned their house in the A Torre neighbourhood of Paramos, a parish belonging to the town of Tui (Pontevedra province) which collapsed to rubble along with 11 others when a tonne and a half of explosives stored in a private outhouse exploded on Wednesday.

Ilyasse, 13 and his brother Bilal, nine, told emergency services they believed their parents may have died in the blast.

Both boys are in hospital, but are as yet unaware of the magnitude of the disaster.

Around 263 residents of Tui’s ‘ground zero’ need urgent help, and the local community has been rallying around providing clothing, food, and offering spare rooms.

As well as those whose houses have been wiped out with all their possessions inside, another 50 or so homes are so badly damaged that their owners cannot get inside, and it could be months or even years before they are able to live there again.

Many residents were inside their homes when they crumbled to dust, but other than Ezzoura and Abdelkhalek, they all managed to escape alive, albeit with various relatively minor injuries.

Tui and the wider Baixo Miño district has a large Muslim community, who are mainly Moroccan, althought most of the longer-term residents have Spanish citizenship, like Ezzoura and Abdelkhalek.

This sizeable but close-knit group is now trying to work out what to do to support the couple’s orphaned sons and their extended family.

Abdelkhalek’s brother has travelled over from Algeciras (Cádiz province) and is said to be ‘distraught’ – he has been given accommodation by the local Muslims, who say he was ‘exhausted from the journey’ because he was unable to eat until sundown as the month-long family festival of Ramadan has started.

Neighbour Noureddine Eljabraoui, whose house was also destroyed, says if the children’s uncle cannot have custody of them, she is willing to take them in, and other friends of the family will help out.

Noureddine and dozens of other Muslims are now holding a four-day funerary vigil for the couple, but they are concerned about what will happen to Ezzoura’s and Abdelkhalek’s bodies – the nearest Islamic cemeteries are in Madrid and Catalunya, and pleas to the council over the years for one to be set up in Tui have never borne fruit.

She has now personally asked the president of the provincial government, or Diputación de Pontevedra, for a piece of land the community can use as a cemetery so they can give Abdelkhalek and Ezzoura a proper burial.

Meanwhile, the owner of the firework stash, Francisco González Lameiro, has been released on bail after his arrest, despite being charged with negligent homicide.

He used to own a firework factory two kilometres away, but this was shut down by authorities due to a planning issue.

González Lameiro then moved his wares and raw material to an annexe on a house in Tui, which is said to have stored enough potassium nitrate and sulphur, among other highly-combustible substances, to provide fireworks and gunpowder banger displays for a middle-sized town in the Valencia region for the whole of its March Fallas festival.

Residents say they saw lorries ‘coming and going’, but did not realise what they contained, or they would have reported him.