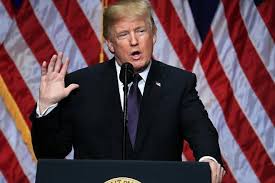 ‘Global Britain’ and ‘America first’ always sat uneasily together. Now the UK must work with the EU to avert a trade war

As punitive tariffs hit UK steel and aluminium exports to the US, the extent of the impact on British firms and communities will be revealed in time. In many respects, British steelmakers and their supply chain firms are collateral damage in Donald Trump’s protectionist push, which has gained momentum in recent weeks. So too are the communities across the UK that depend on the well-paid jobs these companies create.

Businesses most exposed to the US market, with key customers and order books on the other side of the Atlantic, now find themselves at the very sharp end. There may be a fair amount of pain ahead, albeit localised, at a time when many trading businesses in the UK are already grappling with the uncertainties surrounding Brexit. So it’s vital the government moves swiftly to demonstrate its support and backing for those caught up in a political conflagration not of their own making.

British ministers and officials have spent months trying to avoid this outcome, working with their counterparts in both Brussels and Washington to try to broker a compromise. Now they must do their utmost to take the heat out of the situation – and avoid further escalation into an out-and-out trade war. Tit-for-tat measures, including those already proposed by the EU, would spread the impact from our industrial estates and factories to our supermarkets, high streets and the wider economy. A return to dialogue and negotiation, with cool heads on all sides, must be prioritised.

Yet the tariffs announced by the Trump administration are also a timely reminder that national self-interest lies at the heart of every trade negotiation. The US president has made no secret of his desire to put “America first”, nor his willingness to take populist decisions that have negative impacts on business interests in his own country and across the world. His latest move once again shows that the US plays tough in trade negotiations – and plays to win.