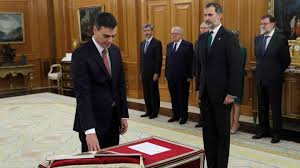 Sánchez’s next foreign affairs-related engagement will take him to Brussels on June 28 for his first official meeting with the European Union to discuss the future of economic and monetary integration.

It is expected Sánchez will meet US leader Donald Trump during his second Brussels visit in July, when both travel to the Belgian capital for the next NATO summit.

Trump expressed his wishes at the weekend for the USA to continue working closely with Spain following its change of government.

A top Socialist party official has revealed Sanchez will not include ministers in his cabinet from far-left party Podemos, which helped him oust conservative Mariano Rajoy.

Podemos had argued that including other parties in Sanchez’s government would make it more stable but the Socialist party’s deputy secretary general Adriana Lastra said: “No”.

She said “the names of those who will form part of the government will be made public, in a few days, ” but it would be an “essentially Socialist” administration.