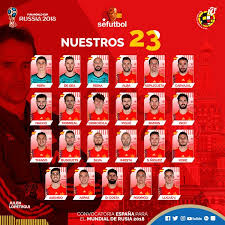 More than half of Brazilians and half of people in Spain expect their teams to lift the World Cup next month, a new survey has revealed.

This compares to only four in 100 people in the UK who believe the Three Lions are destined for victory.

The poll by Ipsos MORI, which surveyed people who are currently aware of the World Cup, highlights the intense pressure that the favourites are under from people at home to deliver.

Almost half of Argentinians are expecting Argentina to go one step further in 2018 and win their first World Cup since 1986, while more than two in five Germans expect Germany to follow up on their 2014 win with a record-equalling fifth title in Russia.

Russians are the least passionate about football

Participants were also asked to rate how passionate they were about football in general, which revealed that Russians are the least passionate of all those polled.

Over a third of Russians (36 per cent) stated that they don’t follow football and don’t watch matches. Some 35 per cent of Russians said that they only very occasionally watch football matches when played by the national side or leading club sides.

Together this means that 71 per cent of respondents from the 2018 World Cup host nation were either completely uninterested in football, or had only a passing interest.

At the other end of the scale, more than four in 10 Saudi Arabians say they are passionate about football and watch as many games as possible at any given time.

Peru and India rated as the next most passionate football nations, with 38 per cent and 31 per cent of individuals from those countries respectively saying that they were passionate followers of football.

Great Britain are currently mid-table, with two in 10 stating that they are passionate football followers, and just over three in 10 saying that they don’t follow football.

Even split between Germany and Brazil

Germany and Brazil currently lead the pack in terms of worldwide predictions on who is going to be victorious in Moscow on the 15th of July.

Between those two Germany has the slightest of edges on Brazil, with 23 per cent of all those polled predicting World Cup joy for Germany, while 21 per cent think Brazil will lift the trophy for the first time since 2002.

Meanwhile, a mere three per cent worldwide believe that England will win their first World Cup since 1966, while two per cent see victory for hosts Russia.

If you want to forecast the World Cup to see which team could lift the trophy, visit our forecasting game where you can decide on the most important things for a winner.