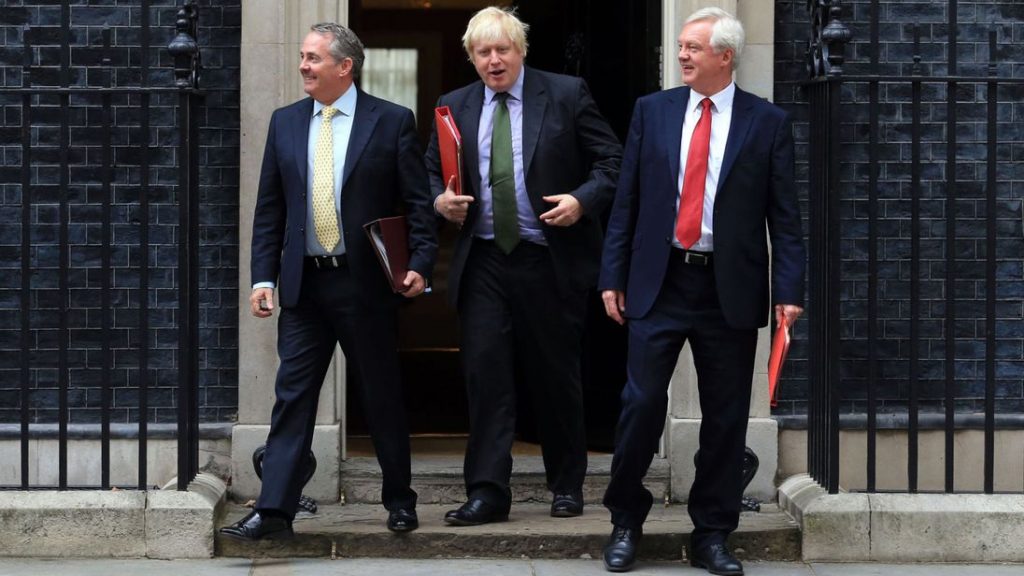 A senior Conservative believes David Davis and Boris Johnson are copying the US president amid Brexit divisions.

A Conservative grandee has accused cabinet Brexiteers of acting like Donald Trump, despite calls for Tory unity ahead of crunch parliamentary votes this week.

Former chancellor Ken Clarke claimed senior ministers such as Boris Johnson and David Davis were vetoing progress on Brexit by using methods similar to the US president.

His warning comes ahead of the EU Withdrawal Bill’s return to the House of Commons on Tuesday and Wednesday, when MPs will decide whether or not to back 15 amendments made to the key Brexit legislation by the House of Lords.

Speculation mounted last week that Mr Davis, the Brexit secretary, could quit the government due to his unhappiness at a proposed backstop solution to the Irish border issue, which forced an amendment to the plan.

It was followed by the emergence of leaked comments, in which Mr Johnson, the foreign secretary, predicted Brexit talks could be headed for a “meltdown”.

Speaking to the BBC’s Sunday Politics ahead of the key Brexit votes this week, Mr Clarke claimed the cabinet’s Brexiteers had “behaved quite disgracefully”.

“What we need to do is to rescue the prime minister from this terrible treatment she is getting from key members of her cabinet,” he said.

MPs will be asked whether or not to back a Lords requirement for the government to set out the steps it will take to negotiate for the UK to form a customs union with the EU; something Theresa May has consistently ruled out.

Mr Clarke said MPs backing peers on the issue would send “a clear signal that a customs union is what we want”, adding: “A customs union actually steers things in the direction Boris and David Davis and these people are trying to veto.

“The Brexiteers are proceeding with Donald Trump-type methods of appearing to agree one moment and then confronting and vetoing any progress.”

Mr Clarke spoke after the US president stunned world leaders by tearing up a joint communique from a G7 summit.

The Remain-supporting MP also dismissed as “nonsense” a joint call by former Conservative leader Iain Duncan Smith, a prominent Brexiteer, and Amber Rudd, a fellow Remainer, for Tory MPs to back Mrs May this week.

The pair used an article in The Sunday Telegraph to warn defeat for the prime minister could lead to the fall of the government and risk Labour leader Jeremy Corbyn entering Downing Street.

Mr Clarke said: “Nobody in the House of Commons wants a general election. Most Labour MPs are as terrified by the idea of a Corbyn government as I am.”

He told the BBC’s Andrew Marr Show: “This is a negotiation. We have put something on the table. Michel Barnier has responded constructively. We now need to get down and talk.”

Mr Davis had demanded explicit guarantees of a time limit to the backstop proposal in crisis talks with Mrs May on Thursday, with an amended text stating the government “expects” the arrangement – which would see the UK retain elements of the EU’s customs union – to end in December 2021.

Pressed on whether a backstop arrangement would end by the time of the next general election in 2022, Mr Lidington responded: “Everybody is working towards getting this sorted as soon as we possibly can.”

Mr Lidington’s ministerial colleague, housing minister Dominic Raab, was asked by Sky News’ Sophy Ridge whether there was a need for more cabinet discipline, to which he simply replied: “Yes.”

He said: “Everyone needs to get behind the prime minister.

“We need to show as a government and also as a country that we’re bigger than the sum of our parts… we need to work together from backbenchers right the way through to the top team.”

Former Conservative Party co-chairman Grant Shapps suggested last week’s battles over Brexit had come about because of “drift” on decision-making.

He told Sky News: “When Theresa May takes a decision people actually go, ‘ah, OK, well, I may not agree with all of that but, you know what, the decision’s been made, I’m prepared to follow’.

“I think the problem comes when things are allowed to float, drift and decisions aren’t made and that’s when you tend to get these kind of heated-up moments.”

Despite being the ringleader of a plot to topple Mrs May last year, Mr Shapps said it was now “perfectly conceivable” the prime minister would lead the Tories into the next general election and she “potentially even wins that election”.

“I think it is possible, but we do need to have more decisions made, less waiting around for things, get things out in front of parliament, not impossible, maybe 30% or 40%,” he said.