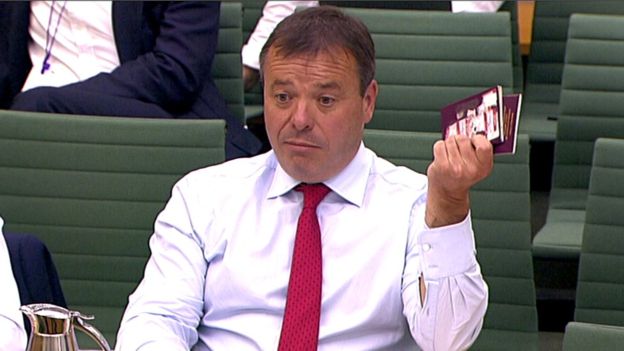 Arron Banks, who helped fund the Leave.EU Brexit campaign, has told MPs there is “no evidence” he was involved in a conspiracy with Russian officials.

And he accused the Commons media committee of being “Remainers” with a “vested interested in trying to discredit the Leave campaign”.

But he insisted that did not mean he was part of a conspiracy.

On Sunday, it emerged that Mr Banks had had two more meetings with the Russian ambassador Alexander Yakovenko than he had previously disclosed in his book on the referendum battle, The Bad Boys of Brexit.

The last of these was in November 2016, three days after Mr Banks, Mr Wigmore and the former UKIP leader Nigel Farage met Mr Trump in New York following his presidential election victory.

According to details of emails reported by the Sunday Times and the Observer, Mr Banks and Mr Wigmore also discussed potential business opportunities in Russia including a proposal involving six gold mines.

Mr Banks attempted to laugh off suggestions of a conspiracy over his meetings with Mr Yakovenko, telling MPs: “I was hoping for a good lunch and that is what I did gain from it.”

He added: “The only thing we gave in the second meeting was the telephone number of the (Trump) transition team because the Russians wanted to get hold of the transition team.”

He denied he was in Moscow in February 2016, as claimed by the Sunday Times, and produced passports containing Russian visas which he said proved he had been in Moscow twice in recent years, in March 2015 and October 2014.

His colleague, Andy Wigmore, was asked if Leave.EU had received any money from the Russian government. He replied: “No. Nyet.”

He said he had first sought a meeting with Russian officials at a UKIP conference in his role as a diplomat for Belize.

“His (Mr Banks’) wife is also Russian. We thought it would be nice,” he told MPs.

Mr Wigmore said he was also “trying to find investors” for a banana farm in Belize which, because of its ownership, could not sell produce in the US or UK.

“One of the conversations we had was about that. There was a myriad of things we wanted to talk to them about… it wasn’t anything to do with politics,” he told MPs.

Mr Wigmore said the meeting with Mr Trump had not been planned and only came about because the US President’s adviser Kellyanne Conway had asked if they “wanted to go and see the boss” when they were in Trump Tower, in New York.

He claimed he gave the Trump transition team the phone number of Number 10 Downing Street, because the team had “no relationship” with the British government.

Mr Wigmore, who was Leave.EU’s communications director, kicked off the session by calling on the committee’s chairman to stand aside.

He said Conservative MP Damian Collins should excuse himself from the evidence session because he accepted hospitality from “Putin’s number one man in the United Kingdom” and might be “conflicted”.

He called the suggestion a “nice try” adding “you might have better intelligence than me… I didn’t know that Roman Abramovich was Putin’s number one man in London”.

He said “no inducements or offers, no shares in goldmines” came out of his visit to Chelsea v Crystal Palace.

“Chelsea won 2-1, that was the extent of the entertainment,” said the committee chairman.

Mr Banks then went on to attack the credibility of Brittany Kaiser and Chris Wylie, whistleblowers who had previously given evidence to the committee about controversial data firm Cambridge Analytica.

He dismissed Canbridge Analytica as an “advertising agency” that “did a little bit of politics on the side”.

“We had two or three meetings with them and it became clear to me that – as is true in a lot of politics – there is a lot of sizzle and sometimes not a lot of substance,” he said.

Leave.EU, which was backed by Nigel Farage, lost out to Vote Leave in the battle to become the official Leave campaign and bad blood remains between Mr Banks and Vote Leave director Dominic Cummings, who has refused to be questioned by the committee.

Mr Banks, who told the committee he “despised” Mr Cummings, was quizzed by MPs about Leave.EU’s alleged use of “fake news” ahead of the 2016 EU referendum.

“We were not above using alternative methods to punch home our message or lead people up the garden path if we had to,” he told the MPs, adding that Parliament was the “biggest source of fake news”.

Mr Wigmore said “the piece of advice that we got, right from the beginning, was remember referendums are not about facts, it’s about emotion and you have got to tap into that emotion”.

He described himself as an “agent provocateur,” adding: “We were running a campaign deliberately aimed at making fun of people.”

Mr Banks was questioned about his business interests and the source of his wealth, clashing with Labour MP Ian Austin who wanted to know more about his insurance company Southern Rock.

Mr Banks denied the claim and accused Mr Lucas of using parliamentary privilege to make “false statements” which “he knows will be reported elsewhere and that’s why he’s doing it”.

He said no money from his overseas business interests formed part of his political donations and he was “crystal clear” about the rules.

The insurance tycoon said he would not be involved in campaigning if there was another EU referendum, adding: “If I had my time again I probably wouldn’t have done this in the first place.”

Leave.EU was fined £70,000 by the Electoral Commission earlier this year for breaches of election law in the Brexit referendum.

The watchdog said the group – which was separate from the official pro-Brexit group Vote Leave – failed to report “at least” £77,380 it spent. Mr Banks is appealing against the ruling.