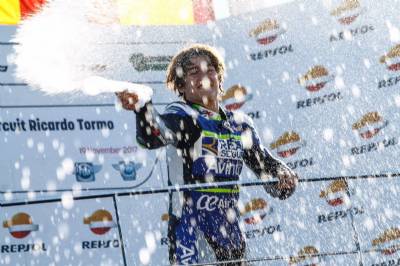 MOTO3 race rider Andreas Pérez has died in hospital at the age of just 14 after a dramatic crash on Sunday at the Barcelona-Catalunya Circuit in Montmeló.

The youngster fell on the sixth bend and other riders, unable to stop in time, ran over him.

He was flown to Sant Pau hospital in Barcelona yesterday evening, where Team Reale Avintia Racing said he was ‘critical’ with ‘severe brain injuries’, but that he was not in cardiac arrest.

The Catalunya-born motorsport prodigy was taking part in the world speed championships at the time.

He was one of the most successfully riders in last year’s European Talent Cup, with two wins and several other podium positions, ending the season in fourth place at only 13 years old.

Andreas had just signed up with Reale Avintia Racing this year.

President Pedro Sánchez sent a message of ‘love and support’ to Andreas’ family and friends, saying he was ‘deeply distressed’ by the young biker’s death.

“It’s difficult to find consolance in the wake of the loss of someone so young,” Sánchez wrote on twitter.

Reale Avintia Racing tweeted this morning: “Andreas Pérez has not won the race of his life. RIP.”

Andreas has literally grown up with motorcycling – his home town of Mollet del Vallès (Barcelona province) is right next to the Montmeló circuit and home of the Derbi bike factory, as well as being close to the Martorellas factory.

He owned his first motorbike at the age of three, a gift from his father, who owns a graphic design firm.

By the age of seven, Andreas was already competing and, at age nine, won the 50cc Catalunya Championships.

He became Spanish Speed Champion at 11, and by this time, friends, family, trainers and fellow riders could already see he was going to be a MotoGP star one day.

Andreas moved up to the Junior World Championship circuit in Moto3 last year after his success at the European Talent Cup.

Reale Avintia Racing, a team many young riders dream of joining because of its prestige, said this morning that it had ‘lost a great biker, but above all, a great person’.

“We’re really going to miss him,” they said.