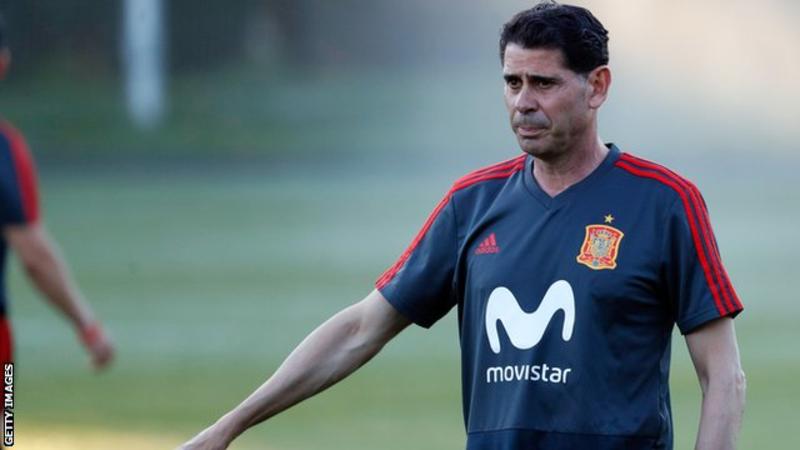 Portugal have reported no injury concerns ahead of their clash with Spain but question marks remain over their starting line-up.

Jose Fonte and Bruno Alves are vying to partner Pepe at centre-back, while either Andre Silva or Goncalo Guedes will join Cristiano Ronaldo in attack.

Daniel Carvajal returned to training for Spain on Tuesday following a hamstring injury but remains a doubt.

Alvaro Odriozola will deputise at right-back should Carvajal miss out.

What a difference a day makes. On Monday, Spain were among the World Cup favourites. On Tuesday, their coach had agreed to join Real Madrid. By Wednesday, Julen Lopetegui had been sacked and their campaign was in disarray before a ball had even been kicked.

Despite reports suggesting players were against his sacking, and Lopetegui’s 20-game unbeaten record, Spanish Football Federation president Luis Rubiales said he had been “compelled” to make the decision after finding out mere minutes before Real issued a press release.

Former Spain captain Fernando Hierro has moved from his director of football role to take over as coach, but Portugal will surely smell blood in a game that promises to be tight. Of their four meetings in major tournaments, Spain lead by two wins to one (if you include a victory on penalties), with only four goals scored in those matches.

Much may rest on the performance of Cristiano Ronaldo, who will be managed by Lopetegui at the Bernabeu next season. With 43 goals for Real this season and club loyalties out of the window, don’t be surprised if Ronaldo twists the knife.

VIEW FROM THE SPANISH CAMP

Spain head coach Fernando Hierro: “We’ve come to fight for the World Cup. We have a great opportunity and that should be the focus.

“When the president told me of the possibility (to become coach), I had three choices: to say no, another was to go and the third was to stay – to take a step forward for the Spanish Federation and for Spanish football. I couldn’t say no because I would not forgive myself.”

Whoever wins this game will top the group and I am backing Spain to edge it.