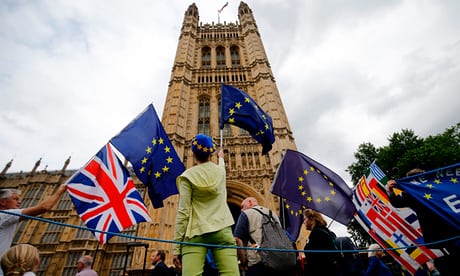 May avoided defeat but a Tory MP quit, the SNP walked out and Labour MPs rebelled.

When the EU withdrawal bill was first presented to parliament the Brexit secretary, David Davis, said it would enable the UK to leave the EU “in the smoothest and most orderly way possible”.

Nine months later and the bill seemed mainly to bring confusion and acrimony to parliament this week. The following is a recap of what happened – and what will come next.

On Tuesday, the bill returned to the Commons for the first time after peers in the House of Lords added 15 amendments, covering everything from environmental protections to ministerial powers in transferring EU laws and the fate of child refugees.

The key battle loomed over an amendment that would let the Commons decide the next course of action if parliament rejected the government’s final Brexit deal.

The day began badly for May: the Tory MP Philip Lee resigned as a junior justice minister so he could vote to keep the measure, adding another vote to the rebels’ tally and making defeat for the government more likely.

Conservative rebels prepare to ‘battle for the soul of Brexit’

While other votes took place, there were extraordinary scenes as the rebels were summoned from the Commons to see May, and the chief whip, Julian Smith, scurried around the chamber to discuss concessions with individual MPs.

The rebels were finally assuaged, believing May had accepted most of the demands on a meaningful vote sought by a key member of their group, Dominic Grieve. But towards the end of the day the Tories’ hardline Brexiters also started to claim victory. Something had to give.

The Tory rebels began to worry

Ahead of a second day of less contentious votes to overturn Lords amendments on the bill, pro-EU Conservatives, such as Nicky Morgan, warned that if Grieve’s amendment had been watered down too much it would simply be reintroduced.

Amid chaotic scenes in parliament – the Scottish National party walked out en masse during prime minister’s questions in protest at the lack of time given to debate devolution-related issues in the bill – everyone waited to see what the government’s proposed new amendment would look like.

Labour suffered its own rebellion

The party had ordered MPs to abstain on a Lords amendment seeking membership of the European Economic Area after Brexit, the “Norway model”. However, 75 voted for it – including five who quit their posts to do so – while 15 others went against it.

A day of waiting ended in anger for pro-EU Tories

With the Lords due to reconvene to consider the changes to the withdrawal bill on Monday (part of the to-and-fro legislative process known as “ping-pong”), the government had a deadline of 5pm on Thursday to publish its amendment on a meaningful vote.

This duly appeared, on the dot of 5pm – and was immediately condemned by rebels. Grieve, Anna Soubry and others said the final text was not what they had expected from ministers, as it gave parliament no real ability to direct the government in the event of no deal.

As Grieve headed to BBC Question Time, during which he promised to resume talks with the government, over in the Lords, Douglas Hogg – the Tory peer who proposed the original amendment on the meaningful vote – tabled Grieve’s own amendment in full.

Aside from even more discontent and mistrust of the government by the Tory rebels, and some faint hopes among hardline Brexiters that ministers might be finally facing down the other side, little has changed.

The Lords seem likely to pass Hogg’s amendment on Monday. It will then return to the Commons on Wednesday, where there might finally be some sort of reckoning.