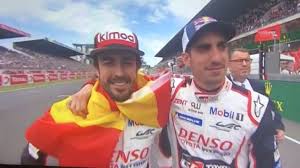 And it was an historic moment for his team, too – along with fellow drivers and ex-Formula 1 racers Sébastien Buemi and Kazuki Nakajima, Toyota took home its first-ever victory in the global motorsport event.

Le Mans 24 Hours is one of the races in the so-called ‘triple motorsport crown’, which includes the Indianapolis 500 and the Monaco Grand Prix.

Alonso, originally from Oviedo, Asturias, has won the Monaco Grand Prix twice and, now with Le Mans under his belt, he is hoping for victory in the Indianapolis 500 to make him only the second person in racing history to take all three titles.

So far, the only racing driver ever to do so is the UK’s Graham Hill.

Alonso, who has not tasted success for far too long in Formula 1, is combining his main discipline with the World Endurance Championship (WEC) with team Toyota – the only on that uses a hybrid car in LMP1 – the aim of which decision was purely to rack up a victory at Le Mans.

His presence lent a much higher profile to Toyota, the WEC and Le Mans itself and, up against non-hybrid cars which were too slow to catch them, the race was effectively a competition between Toyota team-mates.

With Alonso in pole, the first half saw him, Buemi and Nakajima sharing the lead repeatedly with Toyota car number seven driven by Argentina’s José María ‘Pechito’ López, the UK’s Mike Conway and Japan’s Kamui Kobayashi.

The Spaniard started to lose ground when his number eight car (pictured) was held up for a whole two minutes after Buemi was grounded for 60 seconds as a sanction for driving too fast in a caution area after dark the night before, but Alonso’s determined spurts in the small hours gradually closed the gap with car number seven and eventually edged him into the lead.

Toyota faced a few hair-raising moments, with a possibility of a penalty being issued during the Alonso-Nakajima changeover pit-stop when it was believed their car’s wheels were moving before hitting the ground, and Kobayashi covered nearly an entire lap solely on electric after running out of fuel due to a missed pit-stop in the 23rd hour.

But with Buemi, Alonso and Nakajima clinching victory and López’s, Conway’s and Kobayashi’s car second, Toyota could not have asked for a more successful result, hogging the top two spots.

The team fared better than the UK’s Jenson Button, competing for the Russian team SMP in the non-hybrid LMP1, who lost two hours in the pits due to a fault in his engine.

Finally, the 2009 Formula 1 world champion had to withdraw in the 23rd hour when his newly-repaired engine failed altogether.

Race experts are now speculating whether Alonso will ditch Formula 1 after the 2018 season and concentrate entirely on Indycar instead, having very nearly scooped up last year’s Indianapolis 500 but seeing his victory thwarted by engine failure at the eleventh hour.

The Spaniard has already said Indycar is his ‘main priority’ now and that ‘after this year, we’ll see’.

It is no secret Alonso is disillusioned with Formula 1, despite his constant over-confident declarations that the very next Grand Prix or season would bring certain success – and after transferring from an underperforming Ferrari to McLaren-Honda at the start of the 2015 season, found that his new team was also failing to deliver.

Although, along with the UK’s Lewis Hamilton, Alonso is considered to be one of the best racing drivers of the present Formula 1 generation, if not actually among the greatest in history, Ferrari and then Mclaren-Honda have repeatedly been unable to provide a car with the power and reliability to win Grands Prix.

And at the age of 36, Alonso is a geriatric in Formula 1 terms, meaning the other main race-winning teams do not appear keen to sign him.

It looks as though any decision Alonso might make concerning either a possible full-time sideways move in his motorsport career or to continue dovetailing his main discipline with the WEC will hang on how the rest of the Formula 1 season pans out for him.