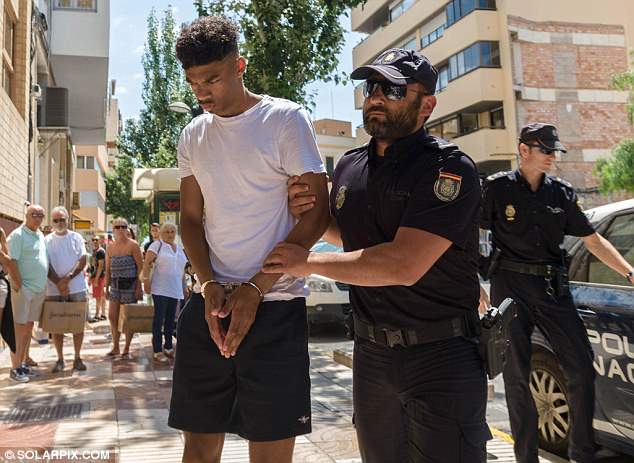 The judge who quizzed three men including two Charlton players over an alleged Ibiza hotel rape on a 19-year-old British holidaymaker has described their version of events as ‘credible and coherent.’

Carmen Robles Zamora also admitted to ‘reasonable doubts’ a sex attack had taken place in a written explanation of why she was releasing the trio instead of remanding them in jail after their Thursday court appearance.

She said the alleged victim’s statement about what happened had ‘credibility’ but highlighted the lack of any injury or bruising that could back up her account.

A judge ordered that a mobile phone owned by Charlton forward Karlan Ahearne-Grant, pictured, should be sent to Madrid to be forensically examined to see if deleted videos of the alleged assault can be recovered

She highlighted her concerns as it was reported locally Charlton forward Karlan Ahearne-Grant’s mobile would be sent to Madrid so police experts could try to recover recordings erased from the phone that could prove key to the case.

The 20-year-old is being investigated on suspicion of a privacy offence but not a sex crime.

He was told after his court appearance he can leave Ibiza but must sign on at the Spanish Embassy in London on the 1st and 15th of each month.

They had their passports taken away from them and were banned from leaving Ibiza and told they also had to sign on at a local court twice a month, although lawyers are expected to appeal to get the bail conditions overturned.

The two Charlton footballers were arrested early on Tuesday morning after the alleged victim’s parents took her to police to lodge a formal complaint.

Odejayi, who is not believed to be a professional footballer, was held on Wednesday after an ID parade. He is understood to have told police he had sex with the teenage British tourist, but said it was consensual.

Olusola Odejayi, pictured, has reportedly told Spanish police that he had consensual sex with the teenager

Carmen Robles Zamora said in her written ruling justifying her decision to release the arrested men and go against the wishes of a state prosecutor who wanted them remanded in jail ahead of a possible trial: ‘Although the victim’s statement has credibility and was made when she was very upset, the report by the forensic doctor does not show any type of injury or even bruising on her thighs and genital area when the victim has stated she was a virgin.’

Contrasting that with the ‘credibility and coherence’ of the men’s version of events, relayed to her during a closed hearing at a court in Ibiza Town after they were taken from a police station in handcuffs, she said: ‘For these reasons there are reasonable doubts of the existence of the commission of the crime which has motivated this current judicial investigation.’

The document also makes it clear that Ahearne-Grant is not being probed on suspicion of participating in the alleged sex attack, but over two recordings on his mobile phone which he subsequently erased.

The reason he is said to have made the recordings – and exactly what he took footage of – has not been made clear.

Local paper Diario de Ibiza reported today the phone would be sent to Madrid for police analysis as part of attempts to recover the erased footage.

Police and court officials could not be reached for comment.

The incident which sparked the three arrests is said to have happened at a hotel in Cala de Bou near the party resort of San Antonio after the alleged victim and a female friend met them at a bar and agreed to go back to their hotel.

A Spanish National Police spokesman said after the first two arrests: ‘National Police officers arrested two English men on Tuesday in San Jose in Ibiza as the suspected authors of a sex attack.

‘The parents of the 19-year-old victim, who is also British, reported the incident to police.

‘It would appear the victim and a female friend of hers who were on holiday in Ibiza with the victim’s parents, went to San Antonio on Monday afternoon and met several lads from a football team in the UK in a bar there.

‘Both women agreed to go back with the some of the men to the hotel they were staying at, in the municipality of San Jose.

‘Once they were in a room, one of the youngsters was allegedly sexually attacked by one of the players, while a second took hold of her and a third recorded her on a mobile phone.

‘After the incident, the visibly affected victim and her friend left the hotel to go back to the woman’s parents.

‘The victim’s parents quickly suspected something was wrong and after discovering what had happened, went to speak to the National Police.

‘National Police officers went to the hotel where those allegedly responsible for the sex attack were staying, and subsequently arrested two men.

‘The police investigations are ongoing and further arrests in the coming hours have not been ruled out.’

The spokesman confirmed the third arrest on Thursday morning, describing the detainee as a 26-year-old British national.

A well-placed police source said at the time: ‘The third man held is the suspected sex attacker.

‘One of the two men held on Tuesday is suspected of holding the woman down during the alleged sex attack and the other of recording it.’

The judicial investigation – which is taking place behind closed doors – will now seek to determine the involvement of each of the three men in the incident and clarify if police have been given an accurate version of events by the alleged victim, her friend and the three men.

The female holidaymaker was asked to ratify her original police statement to the courts. It is believed she has already done so.

Local reports earlier this week said one of the men – thought to be Ahearne-Grant – told police and the judge he was in another room with the alleged victim’s friend and got involved in an altercation with the other two men after hearing noise and going to investigate.

Cala de Bou, which is in the municipality of San Jose, is a popular location for tourists looking to stay somewhere quieter than San Antonio but within easy reach of the brash party resort.

It is just seven miles from the airport and home to a number of hotels and short-stay holiday apartments.

Ahearne-Grant, born in Greenwich is a forward who signed with League One side Charlton as a 17-year-old in September 2014.

He has made more than 60 appearances with the club in Championship and League One football and has played for England at U17, U18 and U19.

Redbridge-born Hackett-Fairchild made his professional debut with Charlton in August last year, and hit the net twice in 12 appearances.

He has previously spent time with Dagenham & Redbridge and Dulwich Hamlet.

A Charlton Athletic spokesman said: ‘The club have been made aware and are looking into this matter.

‘Due to the ongoing investigation we will not be commenting any further at this stage.’