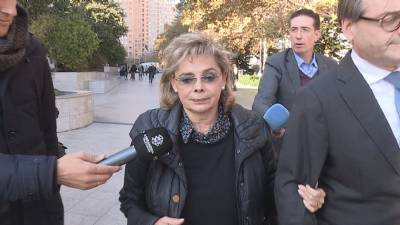 A FORMER councillor on the PP in Valencia has been found dead after falling off a balcony in what may have been a case of suicide.

María José Alcón, who was on the right-wing PP which reigned in the city for 24 years, was under investigation in the so-called ‘Taula Case’ involving money-laundering and misuse of public funds.

Her husband Alfonso Grau, who was deputy mayor under the late Rita Barberá, found her body.

She had fallen from the third-floor holiday apartment the couple owns in Callosa d’En Sarrià (Alicante province), where Grau is originally from, during a weekend away.

Grau had gone out for a walk with a friend from the town and found María José’s body when he returned.

Both husband and wife, who married in 2015, were under investigation in the Taula Case.

María José had reportedly suffered health problems for some years, and was rushed to Valencia’s La Fe hospital in June 2009 after an accident at her home in Mislata (Valencia province), involving a two-metre (6’6”) fall that left her with serious injuries.

As yet, the cause of her fatal fall in Callosa has not been revealed, but is being looked into by the Guardia Civil, who have not ruled out a possible suicide.