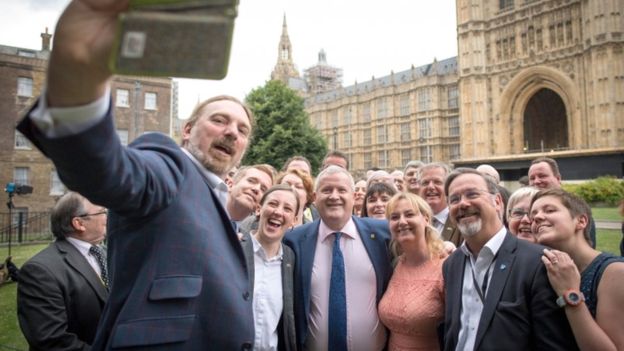 An emergency debate has been held at Westminster on how repatriated powers should be dealt with after Brexit.

The party’s Westminster leader Ian Blackford accused the Conservatives of stabbing Scotland in the back with Brexit legislation.

He told MPs the government was adhering to the principles of devolution by pushing ahead with the withdrawal bill, despite Holyrood refusing its backing.

Mr Lidington said the package was a compromise and balanced.

Earlier Lord Sewel, one of the authors of the devolution settlement, has backed the UK government’s view.

Under the Sewel convention, Westminster does not normally legislate on devolved matters without Holyrood’s approval.

After MPs moved to do this with the EU Withdrawal Bill, Nicola Surgeon said the convention had been “ripped up”.

Lord Sewel said the “size and scale” of Brexit as an issue meant Westminster must be able to act “on initiative”.

And he said the situation was “not a constitutional crisis”, suggesting that some parties were using the row to “seek political advantage”.

Last week, MSPs voted by a margin of 93 to 30 not to give Holyrood’s consent to the EU Withdrawal Bill following a row over how powers currently exercised from Brussels would be used after Brexit.

MPs opted to proceed with the bill, although only minutes were available for discussion of devolved powers during the final debate in the Commons – prompting SNP MPs to walk out of the House of Commons in protest during Prime Minister’s Questions the following day.

First Minister Nicola Sturgeon said the Sewel convention had been “ripped up” by the UK government, saying Scotland had been “treated with utter contempt”.

She said: “Our interests have been ignored, the voice and views of the Scottish Parliament have been completely cast aside, and I don’t think it will be quickly or easily forgotten.”

While Mrs May said she had been taking on board the concerns of her critics, but stressed the legislation must not restrict her freedom in the exit talks.

“As we keep faith with people who voted to leave the European Union, and many of those who didn’t but are now saying ‘let’s just get on with it’, we need to make sure we are putting this legislation into place,” she said.
“But as we do that, of course we have been listening to concerns about the role of Parliament, but we need to make sure that Parliament can’t tie the Government’s hands in negotiation and can’t overturn the will of the British people.”

The government’s current stance is that if MPs reject the Brexit deal, or if no deal has been agreed by 21 January 2019, parliament will be given the chance to vote on a “neutral motion” stating it has considered a minister’s statement on the subject.

However, the motion will be unamendable, which means MPs won’t be able to insert a requirement for Mrs May to renegotiate her Brexit deal, extend the transition phase or revoke our withdrawal under Article 50.

Mr Grieve is adamant that the rebels will only accept a “meaningful vote” and referred to the government’s current offering as a “slavery clause”.

Lord Hailsham said that Mr Grieve thought he had an agreement with the solicitor general last week, but it then appeared “senior ministers” had objected to it and it had now been “repudiated”.

He said he was asking the upper chamber to allow MPs to vote on what Mr Grieve believed he had agreed with Downing Street.

Lord Hailsham said: “The government’s amendment not only fails to deliver the promised meaningful vote. That would be an act of omission and bad enough. But this is far worse.

“The Government is seeking to make the promised meaningful vote impossible and that is an act of commission contrary to what ministers have promised.”

Tory MP Phillip Lee, who resigned as a justice minister in June over the Government&#39;s handling of Brexit. 3:56
A Department for Exiting the European Union spokeswoman said: “We cannot accept this amendment.

“Agreeing to amendable motions would allow Parliament to direct government on its approach to exiting the EU and so does not meet the reasonable tests set out by the prime minister and Brexit secretary last week.
“However, we are pleased that the Lords have adopted the vast majority of the Government’s amendment tabled last week.

“We will seek to overturn the Lords’ decision when the Bill returns to the House of Commons on Wednesday.”

However, Lord Sewel himself has said that the “major constitutional adjustment” of Brexit could be justification for the UK government to “act on its own initiative”, without securing devolved consent.

Formerly an Aberdeen district councillor and president of the Convention of Scottish Local Authorities, John Sewel was a member of the Scottish Constitutional Convention before becoming a Labour life peer in 1996. He served as a Scotland Office minister under Tony Blair at the time the Scottish Parliament was being set up.

He helped pilot the Scotland Act through the parliament, and his name was given to the “Sewel convention” – that Westminster would not normally legislate on devolved matters without consent.

‘A class of its own’

Lord Sewel told BBC Scotland that nobody had foreseen anything like Brexit at the time the convention was drafted.

He said: “There is that ‘not normally’ phrase in the convention which does I think clearly recognise the possibility that something quite out of the ordinary would happen, which would mean the UK parliament would be required to legislate in a devolved matter even without the permission of the Scottish Parliament.

“I think we’re all pretty well agreed that Brexit and leaving the EU is a major constitutional adjustment. We don’t live in normal times, in other words.

“Both sides can have an argument on this. But I would tend to fall back on the one that the size and the scale of the change that’s envisaged and being brought about because of Brexit does put it in a class of its own, and requires the possibility that the UK government would act on its own initiative, without necessarily the approval of the Scottish government.”

Despite months of negotiations, Scottish and UK ministers have been unable to come to an agreement over how to set up joint frameworks of rules and regulations after Brexit, using powers currently held in Brussels.

Scottish ministers claim Holyrood is the victim of a “power grab”, while their Whitehall counterparts say the Scottish government is seeking a “veto” over UK-wide rules.

Scottish Brexit minister Mike Russell said Lord Sewel’s point about Brexit being a “major constitutional adjustment” made it “even more important” that the rules “protecting the Scottish Parliament’s powers” were followed.

During Monday’s debate, the SNP’s Westminster leader Ian Blackford told MPs that the Sewel convention was now “unworkable”, adding that what was “not normal” was the “attack on devolution” by the UK government.

He said the Conservatives had “stabbed the Scottish parliament and the Scottish people in the back”, accusing the UK government of being “anti-Scotland” and calling for the Scottish Secretary David Mundell to quit.

Mr Blackford said the UK government should table emergency legislation to “end the power grab” and “resolve this constitutional crisis”.

A UK government spokesman said Lord Sewel had confirmed that it was proceeding “entirely in line with the devolution settlement”, saying “both we, the Scottish government and now Lord Sewel acknowledge that these are not normal times”.

Mr Mundell has also said the that UK government “followed the spirit and letter of the devolution settlement at every stage”.

He said: “This is not a situation any of us would have chosen. It is not however a crisis, nor is it unforeseen.

“Whilst the devolution settlements did not predict EU exit, they did explicitly provide that in situations of disagreement the UK parliament may be required to legislate without the consent of the devolved legislature.”

Mr Mundell also noted that the bill had been changed from its original form, to reflect a deal with the Welsh government to secure the consent of the parliament there.

Lord Sewel said he did not think the move could “fairly be described as a power grab”, because the Scotland Act states “quite explicitly that it doesn’t affect the power of the UK parliament to make laws for Scotland”.

While he conceded that “the Scottish government has got an argument” in that many of the powers concerned lie in devolved areas like agriculture and the environment, he said it was not a case of the UK government bidding to “somehow remove” responsibilities from Holyrood.

The life peer – who resigned from the House of Lords in 2015 after being filmed allegedly taking drugs – said the convention bearing his name has “worked well” up until now.

He added: “You get a major crisis, of course – and Brexit is a major crisis – and these things get stretched to their limits. But it’s also worth remembering that it is just a convention.

“It is not unknown for political parties to seek political advantage over these sort of issues, and there’s a fair bit of that going on. It’s not a constitutional crisis.”