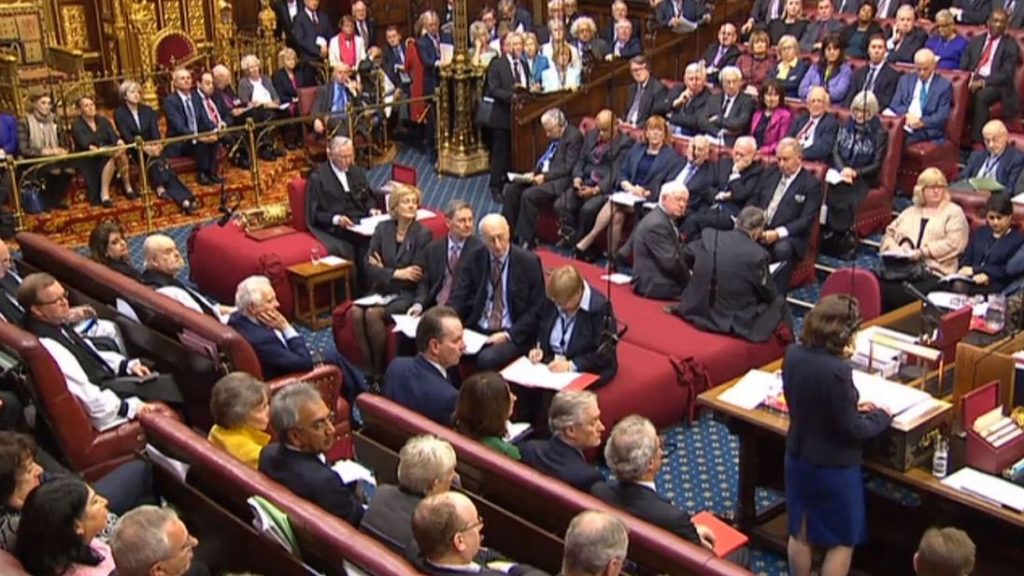 The defeat on a “meaningful vote” sends the issue back to the Commons as part of a further round of parliamentary “ping pong”.

The government has again been defeated in the Lords over giving MPs a “meaningful vote” on the final Brexit deal.

There were 22 Conservative rebels who voted in favour of the amendment, including Tory former deputy prime minister Lord Heseltine and Conservative former ministers Lord Patten of Barnes, Lord Willetts and Baroness Warsi.

A total of 588 peers voted, making it the fourth largest turnout in a single Lords division on record.

It was tabled by Viscount Hailsham and referred to as “Grieve 2”. The amendment would require the government to allow MPs to vote on how it should proceed if there is no Brexit deal by 21 January 2019.

It comes after Dominic Grieve, a former attorney general, warned that the Tory rebels he leads could “collapse” the government if they disagree with the outcome of the withdrawal talks.

The vote sends the thorny issue back to the Commons as part of a further round of parliamentary “ping pong” – with MPs expected to debate it on Wednesday.

Prime Minister Theresa May has warned peers not to “tie her hands” during the Brexit negotiations, adding that parliament must not be allowed to “overturn the will of the British people”.

While Mrs May said she had been taking on board the concerns of her critics, but stressed the legislation must not restrict her freedom in the exit talks.

“As we keep faith with people who voted to leave the European Union, and many of those who didn’t but are now saying ‘let’s just get on with it’, we need to make sure we are putting this legislation into place,” she said.

“But as we do that, of course we have been listening to concerns about the role of Parliament, but we need to make sure that Parliament can’t tie the Government’s hands in negotiation and can’t overturn the will of the British people.”

The government’s current stance is that if MPs reject the Brexit deal, or if no deal has been agreed by 21 January 2019, parliament will be given the chance to vote on a “neutral motion” stating it has considered a minister’s statement on the subject.

However, the motion will be unamendable, which means MPs won’t be able to insert a requirement for Mrs May to renegotiate her Brexit deal, extend the transition phase or revoke our withdrawal under Article 50.

Mr Grieve is adamant that the rebels will only accept a “meaningful vote” and referred to the government’s current offering as a “slavery clause”.

Lord Hailsham said that Mr Grieve thought he had an agreement with the solicitor general last week, but it then appeared “senior ministers” had objected to it and it had now been “repudiated”.

He said he was asking the upper chamber to allow MPs to vote on what Mr Grieve believed he had agreed with Downing Street.

Lord Hailsham said: “The government’s amendment not only fails to deliver the promised meaningful vote. That would be an act of omission and bad enough. But this is far worse.

“The Government is seeking to make the promised meaningful vote impossible and that is an act of commission contrary to what ministers have promised.”

A Department for Exiting the European Union spokeswoman said: “We cannot accept this amendment.

“Agreeing to amendable motions would allow Parliament to direct government on its approach to exiting the EU and so does not meet the reasonable tests set out by the prime minister and Brexit secretary last week.

“However, we are pleased that the Lords have adopted the vast majority of the Government’s amendment tabled last week.

“We will seek to overturn the Lords’ decision when the Bill returns to the House of Commons on Wednesday.”