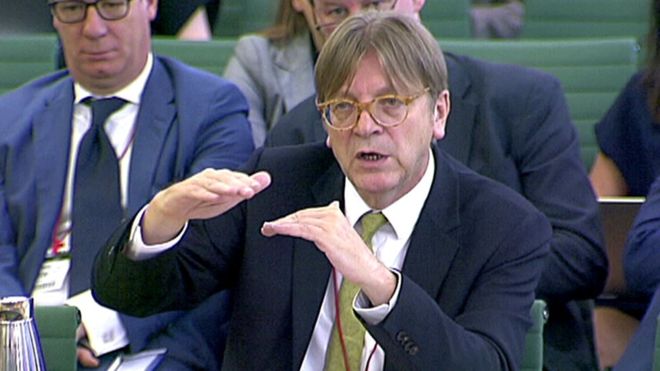 Brexit could take as long as two decades to get EU approval unless the two sides agree a “precise” blueprint in October, Guy Verhofstadt has said.

The European Parliament’s chief Brexit negotiator wants the UK to have an “association agreement” with the EU.

He told the UK MPs’ Brexit committee he wanted to see clear details of how that would work in the Autumn.

If there was room for misunderstanding it could take a long time for the EU to ratify it, he warned.

The EU and UK are hoping to publish the final withdrawal agreement and a political statement on future relations in October or November so it can be voted on by MPs at Westminster and MEPs in the European Parliament.

Mr Verhofstadt said the agreement had to be published by the end of 2018 at the latest, to give the European Parliament enough time to ratify before the UK formally leaves the EU in March.

He said it would take the entire two-year transition period, which is due to kick in after Brexit on 29 March 2019, to sort out the details of future trading relations between the EU and UK.

But he warned MPs that it would take a lot longer if the political statement published in the autumn was not clear enough about what kind of relationship the EU was going to have with the UK.

The advantage of an association agreement, he argued, was that it would be a flexible framework, allowing for a “very narrow” relationship based on trade alone, or a “very broad” relationship.

And it would avoid the prospect of an “inflation of agreements between the EU and the UK” in a lot of different areas as the two sides hammered out their differences during the transition period.

If, he told the MPs, “this whole bunch of agreements will be put in the ratification machine of the European Union, including the member states, we are going to be in ratification – and in uncertainty – for more than one decade, even two decades”.

The European Parliament set out details of what it means by an “association agreement” – something the EU normally signs with aspiring member countries such as Ukraine – in a draft resolution in March.

It would open the door to continued cooperation with some EU institutions, although Mr Verhofstadt said the UK would still have to be kicked out schemes such as the European Arrest Warrant and the Galileo satellite navigation system when it became a “third country” outside the EU.

UK Brexit Secretary David Davis said last month he had no “intrinsic objection” to an “association agreement” but it “depends what’s in it”, adding that he would not accept the continued jurisdiction of the European Court of Justice.

Mr Verhofstadt, who is also due to give evidence later to the Home Affairs Committee, said Brexit had increased the “popularity” of the EU in other member states and that it had reignited debate about reform of its institutions.

He said he was looking forward to the UK government’s Brexit White Paper, which he hoped would give more details about how to resolve sticking points such as the Irish border and ECJ membership.

“I think that is it still possible to have for October/November an agreement on the political declaration. For that we need to speed up, certainly the negotiations in the coming months.”