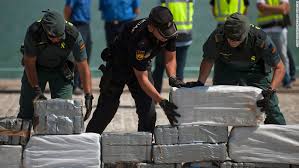 Twenty Nine people have been arrested in connection with a large scale anti-drug operation which saw nearly 5 million doses of drugs confiscated.

15 Raids were carried out in Madrid, Valencia and Malaga, after an investigation lasting nearly a year. It’s understood the drugs were sold in gyms around Madrid, as well as being sold in the Netherlands.

Chemicals were imported from China to produce the drugs, which included cocaine, heroin, LSD, MDMA, Speed and liquid testosterone.