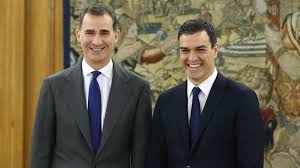 Prime Minister Pedro Sanchez has announced that he will hold meetings with Catalan regional leader Quim Torra on the 9th July.

The meeting will take place as part of a series of discussions with all the autonomous regions presidents.

It’s understood the pair will meet at the Moncloa after discussions by phone with him shortly after coming to power.

The meeting was announced just hours after Mr. Torra sent a letter to King Felipe asking for a meeting to discuss the situation in the north-eastern region.