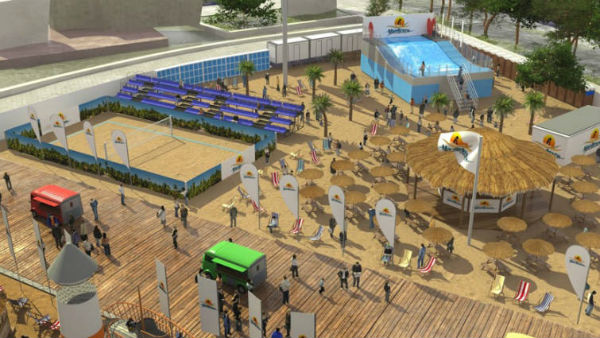 Great news for everyone suffering in the baking Madrid heat – this summer will see the city’s first manmade beach arrive on the Plaza de Colón.

Madrid mayor Manuela Carmena has approved plans for the construction of ‘MadBeach’, which will be a sandy zone complete with chiringuitos (beach bars) hammocks, volleyball courts and a wave pool.

There will also be food trucks and the complex will also offer DJ sessions, chill-out zones, yoga, zumba and “gymnastics for third age”.

Although broadly welcomed by Madrid residents, the plans have already prompted some criticism, with PSOE Councillor Mar Espinar voicing her opposition to the idea of the public space being given over to a commercial enterprise.

In response, Carmena cited the popular and successful artificial beaches in other major European cities such as London, Paris and Amsterdam, and referred to the temporary ice rinks that Madrid has hosted for years, remarking that collaboration between the public and private sectors would be a positive.

MadBeach is expected to be open to the public on July 1st and will run until August 31st. The beach zone will be open from 10am-10pm, costing €9 for a full day and €5 for a half day. There are also plans for a similar city beach in Seville.

While this will be the first playa in the city itself, the Madrid region is already home to a spectacular real beach which is now ‘blue-flagged’: the Virgen de la Nueva beach on the San Juan reservoir.

Maybe, somebody took the lyrics of “Vaya Vaya: Aquí no hay playa” by the popular Spanish Ska band The Refrescos to heart and decided it was time to remedy the one common complaint about Madrid: that it has no beach.