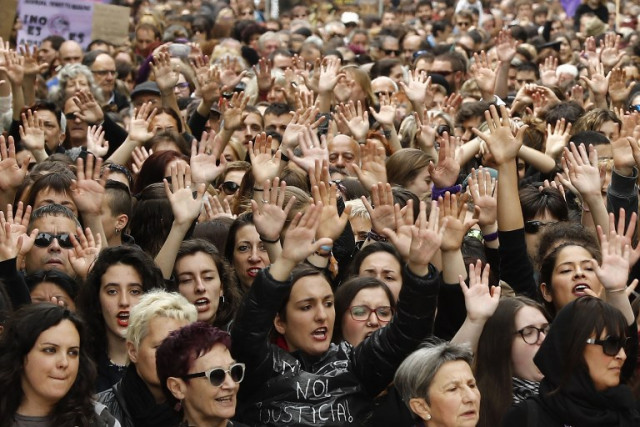 Protesters took to the streets in Spain Thursday after a court ordered the release on bail of five men sentenced to nine years in prison for sexually abusing a young woman at Pamplona’s bull-running festival.

The men, who called themselves “la manada” – “the wolf pack” –  in a WhatsApp messaging group, had been accused of raping a woman, then 18, at the entrance to an apartment building in Pamplona on July 7, 2016, at the start of the week-long San Fermin festival, which draws tens of thousands of visitors.

All five were convicted of sexual abuse in April but were acquitted of the more serious crime of sexual assault, which includes rape, as the court did not consider that the victim had been subjected to intimidation or violence, sparking nationwide protests to demand that the law be changed.

They appealed their jail terms and a Pamplona court on Thursday ordered that the five men be released on bail of €6,000 ($7,000) pending the outcome of the appeal, according to Spanish media reports.

The court will publish its decision on Friday, a court spokesman said without giving details.

Women’s rights groups immediately took to social media to call for protests on Thursday night with the slogan: “If the pack hits the streets, we will as well.”

Around a thousand people marched in Pamplona, some shouting “Enough macho violence”, and there where also rallies in neighbouring Basque cities Bilbao, Vitoria and San Sebastian.

Hundreds also marched in Barcelona, some holding a banner that read: “In the face of patriarchal justice, feminist self-defence.”

“It is a shame, these scoundrel rapists get away so easily. It seems they want to release them so they are ready to start again on July 7th, the day of San Fermin,” said 66-year-old protester Carmen Roman.

Another protest is scheduled to take place on Friday evening outside of the justice ministry in Madrid as well as in the southwestern city of Seville, the hometown of the five men, and other cities.

Prosecutors had argued during the closed-door trial last year that the men’s victim was subjected to “serious intimidation and it prevented resistance or flight”.

One of the accused is a Guardia Civil policeman — currently suspended — and another was once in the army. Several are “ultras” who support FC Sevilla.

The fact that the men took a video of the incident with their smartphone and bragged about it in their WhatsApp messaging group added to the outrage over the case.

The identity of the men has appeared in the press alongside their photographs, which women shared on social media in outrage at the ruling.