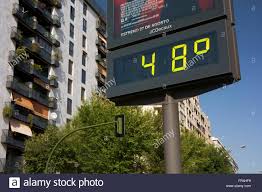 Seasonal forecast shows no strong signs that Spain is in for another scorcher like last year.

After an unusually cold and rainy spring in Spain, it looks like the summer season could be milder than the past four years, according to a forecast from the national weather service, AEMET.

At a press conference, AEMET spokesperson Ana Casals said that there is no certainty that this summer will be less of a scorcher than those in recent memory, but that there is “no strong climatological signal” to suggest heat waves or higher temperatures than in previous years.

Another AEMET spokeswoman, Delia Gutiérrez, added that for now, the probabilities of having a summer warmer than normal, colder than normal or normal are all exactly the same, 33%.

“This summer the forecast is not showing a clear signal, unlike other years when there were signs of a very hot summer ahead.”

The only clear signals are coming out of Catalonia, the Valencia region and the Balearic Islands, where the coming months are expected to be somewhat warmer than usual, and from the Canary Islands, where they could be milder.

Casals added that for now at least there are no indications of any impending heatwave. For this to occur, three conditions have to be met: three days of temperatures within the hottest 5% recorded in the months of July and August, affecting at least 10% of weather stations in the country.

Last year was the worst summer, with five heatwaves

If Spain is not hit by a heatwave this season, it would “not be an extraordinary event in light of the full historical series, but it would be exceptional if we look at the past few years,” said Gutiérrez.

Last year was the worst, with five heatwaves, although the longest one – 26 straight days – was logged in 2015.

Last year, during the heatwave between July 12 and 16, thermometers showed the highest temperature ever recorded in Spain at Córdoba airport, which hit 46.9ºC on July 13.

As for rainfall, AEMET said that their models do not show any “significant or conclusive signs” of either more or less rain than average in the coming months.

The weather service also noted that this spring has been the wettest since 1965.