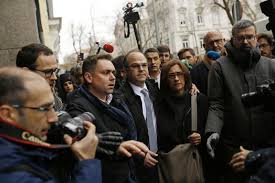 Spain’s government has decided to move jailed Catalan separatist leaders to prisons in their home region, as it pursues efforts to take the heat out of a bitter political face-off that has destabilised the country.

The detention of nine former members of the regional government and heads of civil groups over their involvement in the independence referendum that Madrid declared illegal has been a powerful source of grievance in the wealthy region.

While he remains opposed to any moves towards independence, new Socialist Prime Minister Pedro Sanchez has adopted a conciliatory approach to the problem, calling for dialogue and lifting financial controls on the region.

He is due to meet Catalan leader Quim Torra this Saturday.