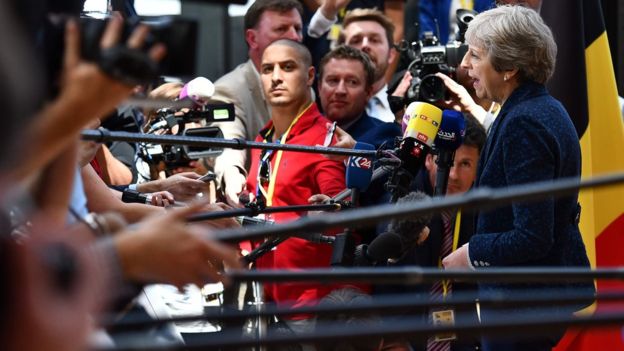 A cabinet minister says he is “confident” his colleagues will settle their differences over Brexit at a crunch summit at Chequers on Friday.

James Brokenshire said there were “strong views” on both sides but predicted the away-day would yield a “clear direction” from the UK.

Ministers are under increasing pressure to spell out what type of relationship with the EU the UK should pursue.

Theresa May has promised more details in a White Paper that will be published after Friday’s cabinet get-together at her official country residence.

The UK is leaving the EU on 29 March 2019, and negotiations are taking place on what their future relationship will look like.

But there is disagreement on the UK side about what sort of trading relationship to pursue with the EU, and how closely aligned they should be in years to come.

Speaking on the BBC’s Andrew Marr Show, Mr Brokenshire, the secretary of state for local government and housing, said: “I think there’s no doubt that there are strong views on either side and that’s what I would expect as we lead into the discussions on Friday.

“But, equally, I remain confident that we will come out from that meeting with that clear direction, the White Paper that will follow, and actually setting out our vision for our future with our EU partners.”

After Brexit day in March 2019, a temporary transition period is planned until the end of 2020 to allow an “orderly withdrawal” for the UK.

Business Secretary Greg Clark did not rule out an extension to this arrangement, telling Sky News the government had to be “guided by the evidence” and avoid “frictions” at the border.

He said the government would assess how long a new customs system would take to put in place, adding that “it seems to me that any reasonable person would have to be guided by the facts and the evidence”.

Ministers have yet to agree on how to replace the UK’s membership of the EU customs union – on Saturday it was revealed Environment Secretary Michael Gove had physically torn apart a report on Theresa May’s preferred “partnership” arrangement.

Brexiteer Conservative MPs have said they will not accept any extension to the transition phase.

More than 30 have signed a letter to Mrs May urging her to face down people trying to “undermine” the 2016 vote to leave the EU.

Their other demands include not replicating the EU’s customs union and an end to the free movement of EU citizens.

“Our departure must be absolute,” the MPs say.

“We must not remain entangled with the EU’s institutions if this restricts our ability to exercise our sovereignty as an independent nation. Anything less will be a weakening of our democracy. Britain must stand firm.”

Conservative MP Andrea Jenkyns, who delivered the letter to the PM, tweeted: “We must be clear to those in the cabinet and on the back benches, we will not sit back & allow a small minority to dominate.”

Eurosceptic former Tory leader Iain Duncan Smith said Theresa May “probably doesn’t need letters… to tell her what to do”.

He added: “I just think we simply have to get behind her and say, ‘let’s get her over there and tell the European Union they need to do a trade agreement with us and do it pretty quickly’.”

But pro-EU Labour MP Alison McGovern said there was a “serious” price attached to the government’s negotiating red lines like leaving the EU’s single market and customs union.

And she said the Chequers meeting was vital.

“We now need to know what it is the cabinet is trying to achieve – so this cannot be more important.”

There are also Brexit divisions within the Labour Party, with Jeremy Corbyn urged by some of his MPs to back staying in the EU’s single market or support another referendum on the final deal.

Campaigners for a so-called “People’s Vote” have published a survey of members of Unite – the trade union that is Labour’s biggest donor – where a majority were in favour of a second referendum.

Of almost 1,000 polled by YouGov, 57% backed a second referendum compared with 34% who were against, while respondents believed, by a margin of by a margin of 58% to 21%, that leaving the single market would make Britain worse off.

The People’s Vote campaign said its survey provided “clear evidence that workers are turning decisively against the bad Brexit deal emerging from political machinations in Westminster and botched negotiations in Brussels”.

Mr Corbyn told the BBC’s Sunday Politics: “It’s not our policy to have a second referendum – it’s our policy to respect the result of the referendum but to have serious negotiations with the EU to gain a customs union and access to the single market to protect jobs in this country.”

He added that one of the reasons people voted to leave the EU was because of the UK’s “deeply unequal society where many former industrial areas lose out very badly because they haven’t had the investment they need”.