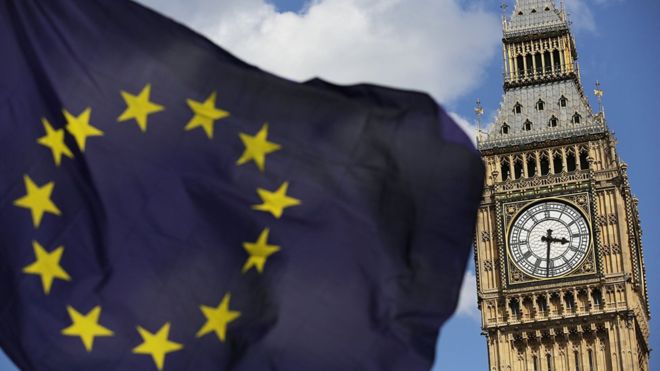 MPs should spend at least five days debating the final Brexit deal reached between the UK and the European Union, a Parliamentary committee says.

The Brexit committee said it would be “the most significant parliamentary debate in a generation”.

MPs must be able to give a “clear expression of its opinion” rather than simply “take note” it says.

The government said Parliament would have “sufficient time” to scrutinise its agreement with the EU.

The UK is due to leave the EU on 29 March 2019, and negotiations have been taking place on what the future relationship between the two sides should look like.

Recently this has focused on how much power MPs should get to approve or reject the final deal – and what should happen if they vote against it.

Their report says the UK should not leave without a deal if the House of Commons refuses to endorse the so-called withdrawal agreement and political declaration of the future UK-EU relationship.

In a section that was not endorsed by some Conservative members of the committee, it says MPs should be able to ask the government to continue negotiating and then decide whether to approve the outcome of any further talks.

Three Conservative MPs also voted against a section of the report calling for Brexit to be temporarily delayed if needed for the negotiations to be completed.

‘Time is not on our side’

When the UK joined the then European Economic Community in 1971, five days were set aside to debate the decisions, the report says.

“Five days would therefore be the minimum time that would be appropriate on this occasion.”

The report also questions whether there will be enough time between an EU summit in October and Brexit day for everything to be completed.

Even under the “most optimistic outcome” of the October summit, Parliament would have “barely five months” to consider the Brexit deal and pass the necessary legislation to implement it, the report adds.

“Time is not on our side,” said the committee chairman, Labour’s Hilary Benn.

“While the cabinet continues to run down the clock as it tries to agree on a plan, it would be unconscionable if the House of Commons was not provided with the time and opportunity both for the fullest debate and to enable a clear expression of its opinion on the most significant decision our country has faced in a generation.”

A Department for Exiting the European Union spokesman said: “A significant amount of the withdrawal agreement has already been agreed and published, and ministers have responded to hundreds of questions from MPs on it, both on the floor of the House and in committees.

“In all circumstances Parliament will be able to express its view, while also allowing the government to deliver on the will of the British people.”

In a separate report, the National Audit Office has been looking at whether the UK’s borders will be able to cope with any extra customs checks that may be needed on Brexit day.

The UK is leaving the EU’s customs union – which allows for goods to pass between member states with no barriers – but has yet to agree a replacement arrangement.

Meanwhile it is in the process of setting up a more up-to-date customs system – which was planned before the decision to leave the EU – and with a tight timescale, there have been warnings of “huge disruption” if the Customs Declaration Service is not delivered properly in time for Brexit.

It is due to be ready in January, just two months before Brexit day.

In its latest report, the National Audit Office said HMRC had been making plans to develop the existing system as a possible contingency.

“This has reduced the risk that it will not be able to handle the potential increased volume of customs declarations at the end of March 2019, in the event of ‘no deal’,” the National Audit Office said.

It said the contingency had not yet been fully tested, but if done successfully it would put HMRC in a better position than previously feared if the new declaration service was not ready in time.

However, it also warns of “further technical and business issues” in the programme, adding that “an already tight timeline has become even more demanding”.