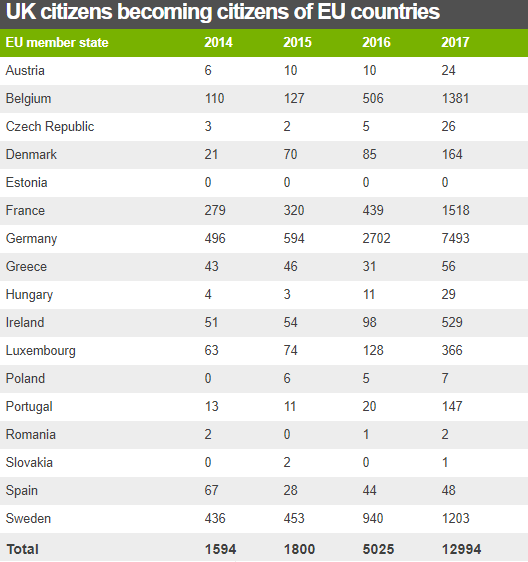 There has been a surge in UK citizens acquiring the nationality of another EU country since the Brexit referendum, according to data obtained by the BBC.

In 2017 a total of 12,994 UK citizens obtained the nationality of one of the 17 member states from which the BBC has received figures.

One applicant, Paul Petty, from Bath, gained a German passport and is now a dual German/British citizen.

“I feel like Europe is pulling apart a bit at the moment,” he told the BBC. “I want to remain part of the EU.”

It took three weeks for Mr Petty to receive his new passport. He was eligible because of his mother’s status as a Jewish refugee.

He described the process as “really easy”, as he still had his mother’s passport.

The rise is presumed to be the result of Britons who can meet the criteria seeking to keep their legal rights attached to European Union membership. The 2017 figure is about seven times the 2015 level.

The dramatic increase is consistent across many countries. France was the second most popular nationality, jumping from 320 instances in 2015 to 1,518 last year, and then Belgium, where the increase was from 127 to 1,381.

The number for Ireland rose from 54 in 2015 to 529 in 2017. However, this does not include new Irish passport applications from the much larger number of people who already had entitlement to Irish citizenship, due for example to being born in Northern Ireland.

Their new nationalities will guarantee the recipients the rights to travel, live and work throughout the EU after Brexit, and they may be able to pass these on to their children.

In most cases those involved have also retained their British citizenship and so have become dual nationals.

Lucy Hales has been living in Italy for five years, having previously spent 12 years in Spain, and plans to apply for Italian passports.

“It is likely that we will move to another European country, because of my husband’s job, so having Italian citizenship would give us some certainty,” she said.

The BBC has obtained this data for 2017 from 17 of the 27 other EU member states. In the other cases it is not yet ready for publication. These 17 include most of the particularly relevant countries, accounting for over three-quarters of all such new citizenships in 2016.

Only a limited proportion of British citizens would qualify for citizenship of another EU state. The bureaucratic process of applying can be slow and laborious.

The criteria vary from one country to another and are sometimes complex, usually depending on ancestry and family links or residency. In the case of Germany, there is special provision for people whose German ancestors were victims of Nazi persecution.

British citizens who fit a nation’s requirements will still be able to apply after Brexit, although for some countries there may be complications. For example, Germany allows dual nationality only with EU states. Unless this changes Britons who become German after Brexit has happened could then find they have to renounce their UK citizenship.