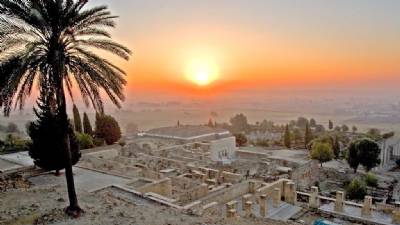 A MEDIAEVAL Arab city and the remains of the Caliphate of Córdoba has been granted UNESCO World Heritage status after the organisation met and voted in Manama, Bahrain today (Sunday).

The Madinat al-Zahra – known in the province of Córdoba as the Medina Azahara – founded in the year 936AD has become Spain’s 47th UNESCO site and member countries such as Norway, Brazil and France have already sent Spain their congratulations.

Spain is in fact ahead of France in terms of UNESCO monuments, and houses the third-highest number in the world.

The Madinat al-Zahra, which may revert to its original name at UNESCO’s recommendation, was founded by the first Khalifa of the territory of Al-Andalus, Abderraman III, of the Omeya dynasty, seven years after the Caliphate of Córdoba was proclaimed.

This Caliphate, recognised as such in the year 929AD, was the most socially, economically and politically powerful in Spain and its splendour and wealth meant Córdoba was the most-advanced city in the entire world at the time.

But the remains of the Caliphate – its buildings, infrastructure and decorative elements – remained buried for around 1,000 years until it was discovered in the 20th century in the outskirts of the city.

The seat of the national government of the time was reduced to ruins less than 100 years after it was built when it was sacked during the Civil War in the early 11th century and it was wiped from history altogether for 10 centuries.

A rebellion which led to the fall of the Caliphate of Córdoba in the year 1010, the continued destruction of the Madinat al-Zahra continued over the next few centuries with the Spanish Inquisition, as the Catholic reconquest was known, and a growing élitism in Córdoba over the late Mediaeval era.

In fact, construction material pillaged from the Madinat al-Zahra was used to build iconic monuments, such as Sevilla’s famous Giralda Tower and the Catholic monarchs’ fortress, the Alcázar, whilst other elements ended up in private collections.

Even today, chunks of the Madinat al-Zahra can be found in international auction catalogues.

It would not be until architect Ricardo Velázquez Bosco, in charge of conservation for the famous Grand Mosque in Córdoba, began searching around the buried site in 1911 to find materials for building the city’s cathedral porticos that the complex would be uncovered.

By the time Velázquez Bosco died in 1923, the Royal residence in the upper part of the old Caliphate city and various rooms inside the fortress had been uncovered and the boundaries of the Madinat had been determined.

The regional government of Andalucía took over its management in 1985 and began a restoration process that culminated with an exhibition in 2011, The Splendour of the Omeyas of Córdoba.

During this, some 300 parts of the ancient city from all over Spain and also Qatar, Jordan, Saudi Arabia, Syria, Morocco, Kuwait, Tunisia, France, Germany and the UK were brought together for the first time in over a millennium and displayed in the Madinat al-Zahra.

Madinat, also referred to as Madina or Medina, is the Arabic word for the old town or original hub of a town or city.