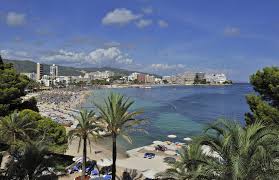 A 25-YEAR-OLD holidaymaker has died in a fall from a third-floor apartment in Magaluf, Mallorca – on exactly the same street as an Irish tourist was killed less than a month ago.

Emergency services were called out to the apartment complex on the C/ Torrenova at 04.55 this morning (Monday), where they found the young man on a patio that they described as ‘very difficult to reach’.

The youth, whose nationality has not been revealed, had suffered multiple fractures and was assisted on site before being taken to Palma de Mallorca’s Son Espases University Hospital in an ambulance equipped with intensive care facilities.

He later died after being admitted.

‘Balconing’ is where young tourists, usually northern Europeans and normally under the influence of alcohol, ‘dare’ each other to jump from their hotel or apartment terrace into the swimming pool below.

Several lives are claimed every summer as a result, but perhaps worse, many more young lives are truncated forever by brain damage and other injuries, often leaving them totally paralysed.

Greater, perhaps, than ‘balconing’, however, is the incidence of young revellers attempting to climb from one balcony to another, either as a shortcut to see friends in another room, because of forgetting or losing their keys, or just as a daredevil stunt.

Earlier in June, a 20-year-old man from Ireland on holiday in Magaluf fell to his death on the same street as the latest victim, the C/ Torrenova.