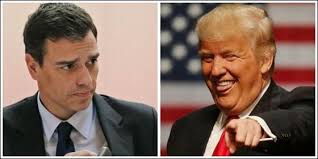 US President Donald Trump has sent a letter to Spanish Prime Minister Pedro Sánchez to remind him of his predecessor’s pledge to boost Spain’s military spending.

The letter, which also complains that US taxpayers are footing most of the bill for Europe’s defense, is similar to others that were sent to at least eight European prime ministers whose countries are spending less than 2% of their gross domestic product (GDP) on defense.

The reminder comes shortly before a NATO summit due to be held in Brussels next week.

Trump’s letter arrived at La Moncloa, the seat of the Spanish government, around 10 days ago, after the Spanish king and queen’s official visit to the US. The letter ends with a mention of that visit, which included a meeting between Felipe VI and Donald Trump at the White House on June 16.

Despite the friendly tone, the goal of the letter is to remind the new Spanish government that the previous PM, Mariano Rajoy of the Popular Party (PP), had personally promised to devote more resources to defense at a meeting in Washington DC in September 2017.

The one-page letter admits that Spain has experienced “a terrible economic crisis” but also notes that this situation is now being overcome. Trump also underscores that NATO allies gathered at the Wales summit of September 2014 pledged to spend at least 2% of GDP on national defense within a decade.

In a bid to show sympathy for Spain’s concerns, the letter talks about NATO’s growing interest in its southern flank and in the fight against terrorism.

Although the letter was written specifically for Pedro Sánchez, it is similar to other letters that Trump has sent in recent weeks to other NATO allies, including at least Germany, Italy, Portugal, Norway, Belgium, The Netherlands and Luxembourg. These are all countries that spend less than 2% of GDP on defense, and are unlikely to increase this figure by 2024.

NATO Secretary General Jens Stoltenberg is due to meet with Spanish Prime Minister Pedro Sánchez in Madrid on Tuesday. The goal of the meeting is to prepare for the NATO summit to be held in Brussels on July 11 and 12. It will be Sánchez’s first Alliance summit, and the first time that he has coincided with Trump at an official event.

Spain’s previous defense minister, the PP’s María Dolores de Cospedal, sent NATO a letter in December committing to spend 1.53% of GDP on defense by 2024, representing €18.5 billion, or twice as much as is currently earmarked for military spending. But this pledge was made without consulting the opposition, and the new Socialist government has yet to say whether it will incorporate it into its own plans.

Sources consulted by this newspaper said that the letters are Trump’s way of setting the agenda for the upcoming NATO summit. Besides the letters, the US president has been making public statements in connection with defense spending. On June 29, he told reporters traveling with him on Air Force One that “Germany has to spend more on defense. Spain, France… It’s not fair what they’ve done to the US.”