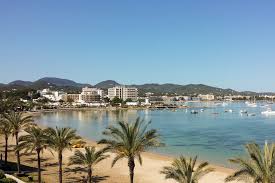 Investigators said the 28-year-old leapt from a balcony after traffic cops arrived at his door wanting to speak to him about a crash.

A British holidaymaker has been seriously injured after allegedly jumping out of the second floor of his Ibiza hotel as police tried to question him about a hit-and-run car accident.

Investigators said the 28-year-old leapt from a balcony at the Hostal Rita after opening the door to traffic cops who wanted to speak to him about a crash on Sunday afternoon in which a woman was seriously injured.

Paramedics at the scene said he could be suffering spinal injuries in an initial evaluation shortly after the incident on Monday night.

He is now at Can Misses Hospital in the island capital Ibiza Town.

No-one was immediately available for comment at the hospital this morning.

It’s believed police wanted to speak to him about an accident in which a car hit a motorbike in San Antonio.

The 35-year-old British man riding the motorbike suffered only light injuries in the accident which happened at around 5pm on Sunday.

But the 30-year-old Irish woman he was with suffered severe injuries and was admitted to the intensive care unit of Nuestra Señora del Rosario Hospital where she was breathing with the aid of a ventilator on Monday.

Local Civil Guard officers confirmed the man injured after plunging from his hotel room was a 28-year-old Brit.

A well-placed source said: “The incident does not appear to be connected to alcohol or drugs.

“Traffic police went to his hotel to identify the tourist following a hit-and-run accident in Ibiza on Sunday afternoon in which a person was seriously injured.

“He opened the door and when he saw Civil Guard officers standing there, he turned and ran to his terrace and jumped over the edge.

“He was on a second floor and fell around 25 feet. The initial evaluation was that he could have suffered spinal injuries.”

The source added: “The investigation is ongoing and police will attempt to speak to him again about the traffic accident once he is well enough.

“This man took a very drastic course of action so officers will also be looking into whether he reacted the way he did just because of the accident or for other reasons as well.”