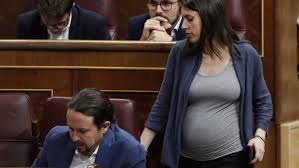 PODEMOS’ Irene Montero has given birth to her and party leader Pablo Iglesias’ twins three months prematurely, just 26 weeks into her pregnancy.

Spokeswoman and MP Irene was in a Parliamentary session to vote on the new members of the board of directors for Spain’s national television and radio broadcasting corporation, the RTVE, when she went unexpectedly into labour.

She is said to be in a national health system hospital in Madrid and, although it has not been revealed which, the city has three which specialise in premature births – the 12 de Octubre, the Gregorio Marañón and La Paz.

The twins, who were not due until early October, were delivered with the help of specialists in foetal and perinatal cardiology, and are now in intensive care and under round-the-clock observation.

Irene remains in hospital, where she is said to be in good physical health, although she and partner Pablo are now facing the traumatic ordeal of watching their babies battle for their lives.

According to experts in the field, only babies born in the 25th week of pregnancy or later have reasonable chances of survival without extremely serious and life-limiting damage.

Infants born at 25 weeks, where they are not suffering from very severe and irreversible deformities or other, similar complications, are always treated and placed in intensive care.

It is generally considered that an embryo does not become a ‘foetus’, or ‘unborn child’, until between 22 and 24 weeks of gestation, since prior to this, there is no brain activity.

Irene’s and Pablo’s twins have only just made it into the ‘probable survival’ period, meaning their situation is touch-and-go.