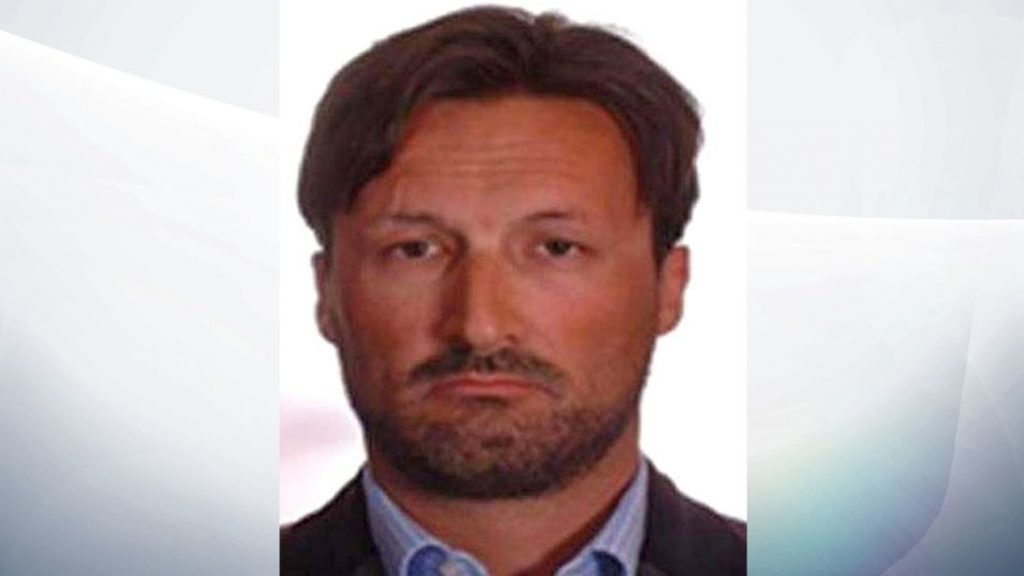 The 45-year-old, who had been on the run since 2012, tried to jump from a balcony before being wrestled to the ground.

Britain’s most wanted fraud suspect Mark Acklom has been arrested in a dramatic raid on his hideout, two years after he went on the run in Europe.

Acklom, 45, was held by police at an apartment he was sharing with his wife and their two young children in Switzerland.

He is wanted in the UK for allegedly fleecing a woman of her £850,000 life savings after posing as a wealthy banker and MI6 agent and promising to marry her.

It’s understood that as officers entered his rented home, conman Acklom tried to jump from a balcony before being wrestled to the ground.

He was held at an apartment in the lakeside town of Wadenswil, a 20-minute drive south from Zurich, after a police surveillance operation lasting several days.

He was arrested by Swiss police in an investigation involving the UK’s National Crime Agency (NCA) and Avon and Somerset Police.

A police mugshot taken after his arrest on Saturday night shows Acklom, normally well-groomed, with long hair and a beard.

Sky News understands that Acklom is planning to fight requests for his extradition by British authorities when he appears in court.

His alleged victim Carolyn Woods, 58, said at her Cotswolds home: “I am delighted that after all this time Mark Acklom is in custody and I look forward to him being brought back to face justice.”

Ms Woods claimed Acklom left her broke and suicidal in 2013, a year after he walked into her boutique in Tetbury, Gloucestershire, and charmed her into a romance.

Last summer, long after his name was added to the UK’s Most Wanted list, Sky News broadcast a photograph of Acklom sitting with another man at a pavement cafe in Geneva, 270km (170m) from Zurich.

He was snapped by someone who claimed to have been a victim of his.

Police kept watch on the tiny, back-street cafe, a five-minute walk from Lake Geneva, but Acklom did not show up again.

Up until then, British detectives believed Acklom was hiding in Spain, where he had spent many years and learned to speak the language fluently. His wife Maria is Spanish.

In January we revealed that Acklom still had a current passport and Swiss residency permit in the name of Marc Long, one of several aliases he has used.The legitimate documents were obtained in 2014, shortly after Acklom fled Britain and after he had changed his name by deed poll.

Recently, the hunt for Acklom has focused on the Zurich area from where it’s believed he has been setting up various companies in a bid to attract investors.

One business claimed to be manufacturing computer chips for black-box data recorders for cars. The company’s website suggested it had customers from the luxury car industry.

At one point undercover police mounted a surveillance operation on a bank after a tip-off that Acklom was planning to meet staff and business associates there, but he did not appear.

Avon and Somerset Police appealed to Sky News viewers across Europe last year to help in identifying Acklom’s wife and two young daughters with whom he was thought to be travelling.

For two years Acklom has been the subject of a European arrest warrant, which originally detailed allegations from his connection with Ms Woods, but a new warrant was issued this year with more allegations.

Detectives have been investigating his life and activities around the Bath and Bristol areas in 2012 and 2013.

Senior investigating officer Detective Inspector Adam Bunting, of Avon and Somerset Police, said: “The arrest of Mark Acklom is the direct result of the co-ordinated efforts of our officers, the NCA and the Swiss authorities and we’re grateful for the professionalism and expertise of all those involved in this international search.

“Acklom thought he could continue to evade capture by moving around Europe but we were determined to locate him and bring him back to this country.

“We’ve updated the victim of the fraud offences on the latest developments and will continue to work with the relevant authorities to ensure he is extradited as soon as possible.”

Ian Cruxton, head of international operations for the NCA, said the hunt for Acklom started in Spain but officers soon started working with Swiss authorities after receiving intelligence of his whereabouts.

He told Sky News: “We have an incredibly high success rate in tracking down fugitives from British justice. The way that we do that is through a whole host of different techniques, including of course, mobilising the ability of the public to assist us, which is why we publish the identities of these individuals.

“This was an international operation – we worked very closely with our partners in Avon and Somerset Police and with the Swiss authorities and we’re delighted he is now the 82nd of 96 wanted fugitives that’s in custody.”

He added: “We see people who are seeking to evade the reach of UK law enforcement adopt all sorts of tactics – sometimes they hide in plain sight, sometimes they seek to live a very clandestine existence.”

The European arrest warrant is not recognised in non-EU Switzerland and so Acklom will be dealt with under an existing extradition treaty.