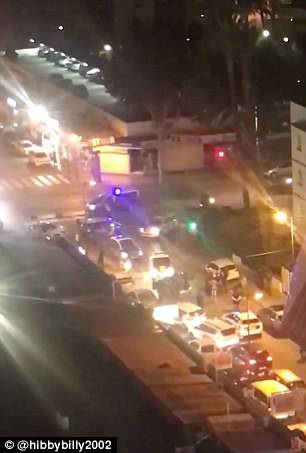 A British tourist has been shot in the buttocks in a Benidorm nightclub after getting caught up in a suspected gangland shooting that also saw a Moroccan ‘drug dealer’ wounded.

Terrified British tourists were forced to flee from bars on the Spanish resort’s main strip, Calle Mallorca, amid reports of a shooting outside the Hippodrome disco-pub.

A 42-year-old Briton, thought to be an innocent holidaymaker, was injured in the attack in an area known as Little England at 11pm last night.

Local sources say the shooting of a Moroccan, who was left with superficial wounds,  was linked to the sale of drugs in the area. A third man believed to be of Arab origin was hit by a bullet, although his injuries were not described as serious.

Witnesses, some from Britain, told how they were forced to ‘do a runner’ from the scene after gunshots were heard.

One said: ‘We were at the pub across from it. Pubs were on lockdown because of it. Couldn’t believe my eyes.’

Another British visitor posted on Twitter: ‘Sitting in a bar in Benidorm, next minute doing a runner after a supposed double shooting.’

A manhunt is underway and police are set to to check CCTV from the area.

Detectives today said the Briton had suffered a superficial wound to his bottom that could have been from a ricochet bullet and would be questioned as part of the criminal inquiry.

A well-placed source said: ‘He was here temporarily and had planned to fly back home on Saturday and we think at this stage he is simply a tourist who was in the wrong place at the wrong time.’

Spanish National Police said this morning they were hunting four men who abandoned a BMW at the scene before fleeing in a taxi.

A spokesman for the force confirmed: ‘No arrests have been made so far. Three men were hurt including a Brit but none seriously.’

A well-placed source said: ‘Witnesses have not said there was a row or fight prior to the shooting.

‘One of the theories we are looking at is this was a settling of scores linked to drug dealing.

‘The BMW car the gunmen arrived in was abandoned at the scene and is now in a police pound so it can be examined by forensic experts. The men police are hunting fled the scene in a taxi.

‘They could be of Arabic origin or eastern European origin.’

The getaway vehicle is understood to be a foreign-plated vehicle. The street where the shooting happened – Mallorca Street – is in the heart of Little England.

The Hippodrome disco-pub is popular with Brit tourists and expats.

There is no suggestion the shooting was in any way linked to the nightspot.