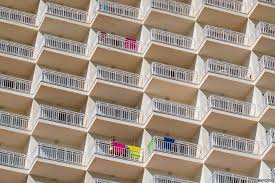 Another holidaymaker in Magaluf has died after falling from an aparthotel terrace – the third in less than a month and the second in a week.

Two days ago, a 25-year-old man plunged to his death just before 05.00 from a third-floor apartment on the C/ Torrenova, the exact same street where an Irish man aged 20 was killed in similar circumstances nearly a month earlier.

And this morning, emergency services were called out to a hotel on the C/ Martín Ros García at around 01.30 after a man aged 23, believed to be a northern European holidaymaker, fell from a fifth floor and lost his life instantly in the impact.

Campaigns in several languages, although largely targeting Brits, are attempting to curtail the foolhardy stunt of ‘balconing’, where young, alcohol-fuelled tourists try to jump from their hotel terrace into the pool below.

In some cases, however, the victims were attempting to cross from one balcony to another when they fell, either as a shortcut to another room or because they had left their keys inside.