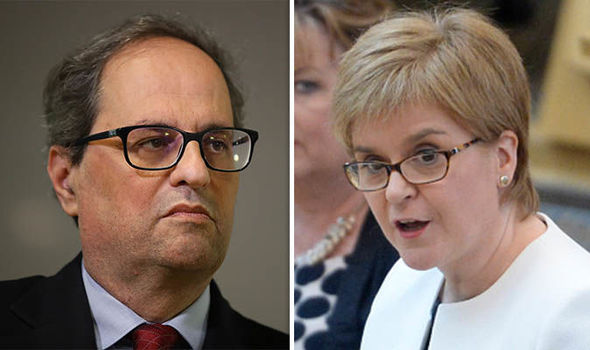 Scottish First Minister Nicola Sturgeon is set to cause controversy after inviting Catalonia’s pro-independence President Quim Torra to her Edinburgh home next week, who is also set to meet academic Clara Ponsati.

The Catalan President will be visiting Ms Sturgeon’s residence to discuss extradition charges against Professor Ponsati who lives in Scotland but is wanted in Spain for her part in the illegal Catalonia independence referendum.

Spanish authorities charged Professor Ponsati with violent rebellion and misappropriation of public funds and are attempting to extradite her to her homeland to face charges.

The 61-year-old could face a total sentence of up to 33 years if convicted of the charges, with fears rising she could spend the rest of her life behind bars.

He will then meet Professor Ponsati before joining Mrs Sturgeon at her official residence, Bute House in Edinburgh on Wednesday, marking the two governments’ first high-level meeting between in 10 years.

The Catalan President will arrive in Scotland in due time for Professor Ponsati’s latest procedural hearing case at Edinburgh Shreiff Court, due to to take place on Thursday.

Professor Posanti was the director of the School of Economics and Finance at the University of St Andrews. She was in Catalonia when the region declared independence from Spain, and then returned to her post in Scotland.

But she was arrested in March this year and served with a European arrest warrant by Spanish judges.

The four-week hearing is described by the prosecution as “politically motivated” by Spain.

The prosecution argued a European arrest warrant should not be executed, but the Advocate Depute, acting on behalf of Spain, wants her to face the equivalent charge of treason in Scottish law.

The Catalonians’ fight is often compared the Scottish National Party’s campaign for independence from Britain.

Professor Ponsati’s lawyer, Aamer Anwar said: “Clara Ponsati maintains her innocence of the charges and our instructions remain to robustly defend her from extradition to Spain.

“Clara regards it as surreal that she is now accused of treason, when the Spanish state blames the Catalan government for executing a law that was voted on in the Catalan Parliament elected by the Catalan people.

“From the very beginning we have submitted that the condition of dual criminality is not fulfilled in Scotland, and the European arrest warrants should not be executed.”

A Scottish government spokesman said: “As part of Europe, Scotland has a close relationship with the people of Spain and Catalonia.

“The First Minister regularly meets and hosts leaders visiting Scotland and looks forward to the meeting with the President of Catalonia in Edinburgh to discuss issues on how our two countries can continue to work together.”

However, he added that the meeting would not change the judicial process surrounding Professor Ponsati’s case.

He said: “Ministers have made clear our profound regret that the Spanish government has not proceeded by way of dialogue with Catalonia’s political leaders and that the issue is now, instead, subject to a judicial process.

“The fact that Scotland’s justice system is obliged to act – and will act – in accordance with the law in relation to extradition requests does not change those views.

“Scottish Ministers have no role in the determination of European Arrest Warrants, and no powers to intervene with decisions made by Scotland’s independent judicial system.”