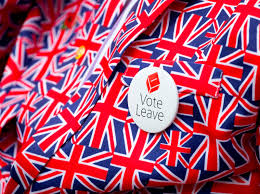 The official Brexit campaign is expected to be found guilty of four charges of breaking electoral law, the BBC has been told.

The draft of an investigation into Vote Leave concludes it broke spending limits and failed to comply with some of the rules.

It also imposes fines as a result of its findings.

But the group’s former chief executive claimed the Electoral Commission had not followed due process.

Matthew Elliott has submitted a 500-page dossier to the Electoral Commission rebutting the claims.

The commission said Vote Leave had taken the “unusual step” of going public having seen the draft report.

According to Vote Leave’s dossier, the commission finds the campaign group:

Crucially, the draft report is said to claim there was coordination between Vote Leave and a smaller campaign, BeLeave, which received a donation of more than £600,000 in the closing weeks of the referendum, after advice from the Vote Leave director Dominic Cummings.

For months there have been allegations that the two campaigns broke the rules by working together too closely. The electoral rules stipulate that different campaign groups can work loosely together but they must not have a “common plan”.

This has always been denied by the two groups and has been investigated twice already by the Electoral Commission.

Vote Leave now admits there was email correspondence between a donor, Anthony Clake, and Mr Cummings about passing a donation on to BeLeave.

It is understood that this third investigation concludes that there was a “common plan”, and therefore the law was broken.

A spokesperson for the Electoral Commission said: “The commission has concluded its investigation and, having reached initial findings, provided Vote Leave with a 28-day period to make any further or new representations. That period ended on Tuesday 3 July.

“The unusual step taken by Vote Leave in sharing its views on the Electoral Commission’s initial findings does not affect the process set out in law.”

It said it would give “due considerations” to representations it had received and then publish a “thorough and detailed closing report in order to provide a full and balanced account”.

Speaking to the BBC, Mr Elliott said the commission had “listened to one side of the story”.

“We offered to go in for interviews, both at board level and at staff level,” he said.

“They haven’t accepted any interviews from our side.”

Mr Elliott said he thought Vote Leave had “acted both within the letter of the law and also the spirit of the law”, and that it was perfectly legitimate that they would “work alongside other groups and encourage them and encourage their activities”.

He denied that he was simply trying to deflect the coming criticism of the campaign.

“We’re saying ‘can they look at our side of the story?”’, he said, adding that they would take legal action to try to overturn the charges if they were not withdrawn.

Tamsin Allen, the solicitor who represents the whistleblowers who went public with claims that Vote Leave broke the law, said: “Vote Leave may not like this conclusion, but there is clearly a proper evidential basis for it.

“The commission should be permitted to complete its work and we await the release of its final report.”

One of the whistleblowers, Christopher Wylie, called for the referendum to be rerun, saying: “If sanctions are issued against Vote Leave or their affiliates, this means the law was broken.”

Another whistleblower, former Vote Leave activist Shahmir Sanni, said: “I’m waiting for the report, but just for clarity, I told you so.”

During Prime Minister’s Questions, Theresa May said she would not comment on “a leaked report” after the matter was raised by the SNP.

She added that the government would consider the final report and any recommendations.

A spokesman for Anthony Clake, whose donation was given to BeLeave at the suggestion of Mr Cummings, said: “Mr Clake was told by Mr Cummings that Vote Leave was reaching its spending limits, so he suggested that he could give it to BeLeave instead, which he did.

“Any alleged collusion between the campaigns is a matter for them.”