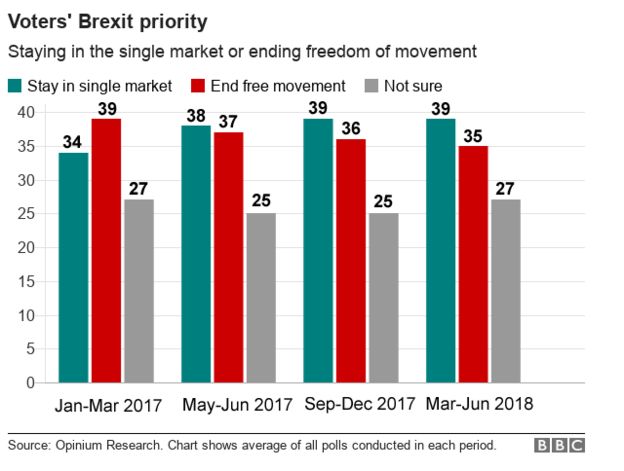 A “make-or-break” meeting on the UK’s future relationship with the European Union will be held by ministers this week. Have the voters they represent been able to decide what kind of Brexit they want?

Two years after the UK narrowly voted to leave the European Union, ministers are working towards the withdrawal deadline of 29 March 2019 – despite reports that they are divided over what Brexit should look like.

The debate – which has also seen arguments about whether there should be referendum on a final deal – is often presented as a choice between so-called “hard” and “soft” Brexit.

These terms mean different things to different people – but a “hard” Brexit is generally taken to mean a significant change, with the UK leaving the EU single market and customs union, and no longer implementing EU freedom of movement rules.

“Soft” Brexit is often used to describe the UK keeping some kind of free trade arrangement with the EU, remaining in a customs union and allowing EU citizens to live and work in the UK.

But where do the UK’s voters, who remain more or less evenly divided on whether they support leaving the EU, stand on what the future relationship should be like post-Brexit?

Two polling companies, Opinium and ORB International, have been tracking this issue since the referendum.

The wording of their questions is important.

Opinium asked voters: “If it becomes apparent that we will not be able to have one without the other, which of the following should be the government’s negotiating priority during the Brexit negotiations? Staying in the single market even if it means allowing free movement of labour, or ending free movement of labour even if it means we leave the single market?”

The first option refers to a “soft” Brexit, the second to a “hard” one.

The graph above shows the average percentage choosing each answer at four key points since January 2017.

First, many voters find answering this question difficult – about a quarter continue to say they are not sure which would be the better choice.

It may be some are struggling with what is meant by “the single market” or “free movement”, while others would perhaps like to be able to do both.

Second, there is no clear majority in favour of either option.

Third, there seems to have been a slight – but only slight – tilt in favour of staying in the single market rather than ending free movement.

The four-point advantage for staying in the single market contrasts with a five-point lead for ending free movement in a couple of polls that Opinium conducted in early 2017.

But this is just one question from one company. And all pollsters know the answer they get often depends on how the question is posed.

ORB has taken a different approach.

Every month since November 2016, it has asked people to agree or disagree with the following proposition: “Having greater control over immigration [‘hard Brexit’] is more important than having access to free trade with the EU [‘soft Brexit’].”

Voters evidently find ORB’s question easier to answer, though as many as 15% still stay they don’t know.

Among those who do answer, slightly more say they back a hard Brexit – that is, they agree that controlling immigration is more important than free trade with the EU.

There is no consistent evidence that this picture has changed during the past two years.

However, ORB’s data confirms Opinium’s suggestion that the UK is split in its views about the kind of Brexit it would like to see.

This is perhaps not surprising given that the country is still more or less evenly divided between Remain and Leave.

In its recent polls, Opinium has found that, on average, about two-thirds of Remain voters (68%) prioritise staying in the single market, while three-fifths of Leave supporters (61%) feel it is more important to end free movement.

The balance of opinion among Conservative and Labour supporters is rather different too.

According to Opinium, 40% of Conservative supporters would prioritise ending free movement and only 20% staying in the single market. But among Labour supporters, the equivalent figures are 11% and 45% respectively.

Some of the demographic divisions revealed by the 2016 referendum are repeated in the hard-v-soft debate too.

ORB’s recent polls suggest only 26% of 18- to 24-year-olds and 35% of 25- to 34-year-olds agree it is more important to control immigration than to secure access to free trade with the EU.

Meanwhile, women (38%) are much more likely than men (16%) to say they are not sure whether the UK should stay in the single market, or end free movement.

Another aspect of the hard-v-soft debate on which polling has been relatively scarce is whether or not the UK should stay in a customs union with the EU.

But in the past couple of months, Opinium has asked people if they’ve heard about a customs union, and whether the government should try to stay in the EU customs union in order to prioritise EU trade or to leave it to allow the UK to grow its trade links with the rest of the world.

On both occasions, more than a fifth said they had not heard of the customs union at all, while 16-17% said they didn’t know what the government’s priority should be.

So, despite the heated debate the issue has recently generated at Westminster, it appears to have passed many voters by.

Among those with a preference, public opinion is again more or less evenly divided, with 31-32% arguing the UK should stay in the customs union and 30% disagreeing.