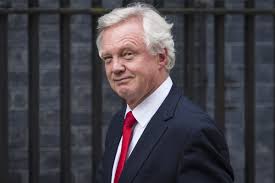 David Davis, who has been leading UK negotiations to leave the EU, has quit his role as Brexit Secretary

He told the BBC that he was no longer the best person to deliver the PM’s Brexit plan – agreed by the cabinet on Friday – as he did not “believe” in it.

He said the “career-ending” decision was a personal one but he felt the UK was “giving away too much and too easily” to the EU in the negotiations.

Mrs May said she did not agree but thanked him for his work.

The resignation is a blow to Mrs May as she seeks to win over Eurosceptic MPs to her proposed Brexit vision, which would form the basis of the UK’s position in on-going talks with the EU.

Dominic Raab, who campaigned for Leave during the UK’s 2016 EU referendum, has been promoted from housing minister to take over from Mr Davis.

The UK is due to leave the European Union on 29 March 2019, but the two sides have yet to agree how trade will work between the UK and the EU afterwards.

There have been differences within the Conservative Party over how far the UK should prioritise the economy by compromising on issues such as leaving the remit of the European Court of Justice and ending free movement of people.

Mrs May’s Conservative Party only has a majority in Parliament with the support in key votes of the 10 MPs from Northern Ireland’s Democratic Unionist Party, so any split raises questions about whether her plan could survive a Commons vote – and has also led to renewed questions about whether she will face a challenge to her position.

In a sign of how delicately positioned the numbers are on Brexit strategy it has emerged that the government has taken the unusual step of arranging a briefing for opposition Labour MPs on the detail of the Brexit plan agreed on Friday.

In his resignation letter, Mr Davis told Mrs May that “the current trend of policy and tactics” was making it “look less and less likely” that the UK would leave the customs union and single market.

He said he was “unpersuaded” that the government’s negotiating approach “will not just lead to further demands for concessions” from Brussels.

Mr Davis, who was appointed Brexit Secretary in 2016, said: “The general direction of policy will leave us in at best a weak negotiating position, and possibly an inescapable one.”

In her reply, Mrs May said: “I do not agree with your characterisation of the policy we agreed at cabinet on Friday.”

She said she was “sorry” he was leaving but would “like to thank you warmly for everything you have done… to shape our departure from the EU”.

Mr Davis told BBC Radio 4’s Today programme that he had objected to Theresa May’s plan at the Chequers meeting, telling cabinet colleagues at the outset that he was “the odd man out”.

He said it was “not tenable” for him to stay in post and try to persuade Tory MPs to back the policy when he did not think it was “workable”.

“The best person to do this is someone who really believes in it, not me.”

He said he feared the EU would seek to further water down the UK’s plans and his resignation would make it easier for the UK to resist attempts to extract further concessions.

Mr Davis told BBC political editor Laura Kuenssberg that he had been compromising for two years and that the latest plan was “a compromise too far”.

But Mr Davis insisted he continued to back Theresa May, saying that if he “wanted to bring her down”, the time would have been after she failed to win last year’s general election outright.

A leadership contest now would be “the wrong thing to do”, adding: “I won’t throw my hat into the ring.”

Eurosceptic MP Steve Baker has also resigned. He played a leading role in the Brexit campaign in the run up to the 2016 referendum. He was promoted to the Department for Exiting the EU as a parliamentary under-secretary in June last year.

Conservative MP Peter Bone hailed Mr Davis’s resignation as a “principled and brave decision”, adding: “The PM’s proposals for a Brexit in name only are not acceptable.”

Labour Party chairman Ian Lavery said: “This is absolute chaos and Theresa May has no authority left.”