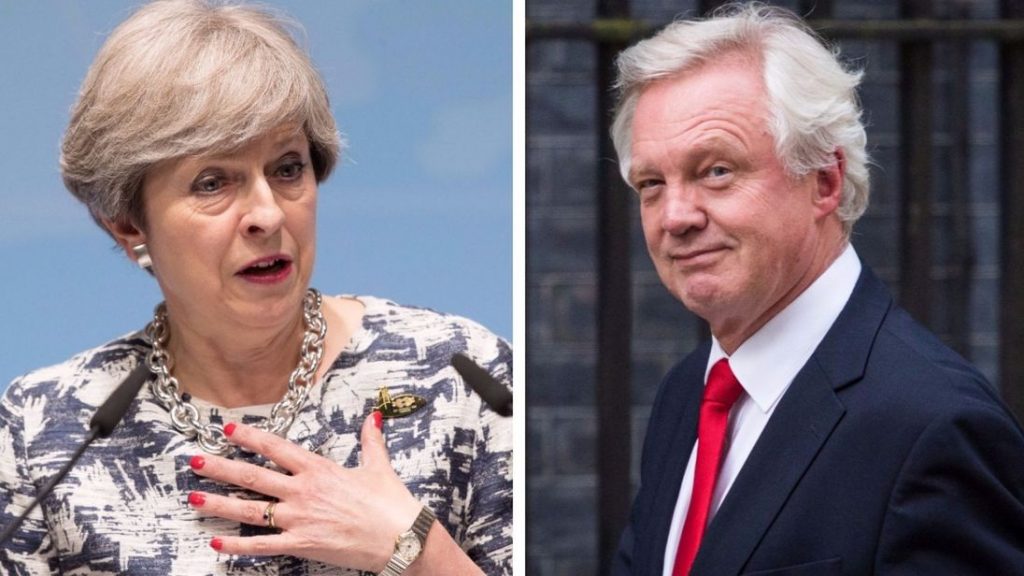 Mr Davis says it looks “less and less likely” the Tories will deliver on Brexit and their pledge to leave the single market.

David Davis has resigned as the government’s chief Brexit negotiator. Here is his letter to Theresa May – and the PM’s own letter in response.

As you know there have been a significant number of occasions in the last year or so on which I have disagreed with the Number 10 policy line, ranging from accepting the Commission’s sequencing of negotiations through to the language on Northern Ireland in the December Joint Report. At each stage I have accepted collective responsibility because it is part of my task to find workable compromises, and because I considered it was still possible to deliver on the mandate of the referendum, and on our manifesto commitment to leave the Customs Union and the Single Market.

I am afraid that I think the current trend of policy and tactics is making that look less and less likely. Whether it is the progressive dilution of what I thought was a firm Chequers agreement in February on right to diverge, or the unnecessary delays of the start of the White Paper, or the presentation of a backstop proposal that omitted the strict conditions that I requested and believed that we had agreed, the general direction of policy will leave us in at best a weak negotiating position, and possibly an inescapable one.

The Cabinet decision on Friday crystallised this problem. In my view the inevitable consequence of the proposed policies will be to make the supposed control by Parliament illusory rather than real. As I said at Cabinet, the “common rule book” policy hands control of large swathes of our economy to the EU and is certainly not returning control of our laws in any real sense.

I am also unpersuaded that our negotiating approach will not just lead to further demands for concessions.

Of course this is a complex area of judgement and it is possible that you are right and I am wrong. However, even in that event it seems to me that the national interest requires a Secretary of State in my Department that is an enthusiastic believer in your approach, and not merely a reluctant conscript. While I have been grateful to you for the opportunity to serve, it is with great regret that I tender my resignation from the Cabinet with immediate effect.

Thank you for your letter explaining your decision to resign as Secretary of State for Exiting the European Union.

I am sorry that you have chosen to leave the Government when we have already made so much progress towards delivering a smooth and successful Brexit, and when we are only eight months from the date set in law when the United Kingdom will leave the European Union.

At Chequers on Friday, we as the Cabinet agreed a comprehensive and detailed proposal which provides a precise, responsible, and credible basis for progressing our negotiations towards a new relationship between the UK and the EU after we leave in March. We set out how we will deliver on the result of the referendum and the commitments we made in our manifesto for the 2017 general election:

2. Ending free movement and taking back control of our borders.

3. No more sending vast sums of money each year to the EU.

4. A new business-friendly customs model with freedom to strike new trade deals around the world.

5. A UK-EU free trade area with a common rulebook for industrial goods and agricultural products which will be good for jobs.

6. A commitment to maintain high standards on consumer and employment rights and the environment.

7. A Parliamentary lock on all new rules and regulations.

9. Restoring the supremacy of British courts by ending the jurisdiction of the European Court of Justice in the UK.

11. Continued, close co-operation on security to keep our people safe.

12. An independent foreign and defence policy, working closely with the EU and other allies.

This is consistent with the mandate of the referendum and with the commitments we laid out in our general election manifesto: leaving the single market and the customs union but seeking a deep and special partnership including a comprehensive free trade and customs agreement; ending the vast annual contributions to the EU; and pursuing fair, orderly negotiations, minimising disruption and giving as much certainty as possible so both sides benefit.

As we said in our manifesto, we believe it is necessary to agree the terms of our future partnership alongside our withdrawal, reaching agreement on both within the two years allowed by Article 50.

I have always agreed with you that these two must go alongside one another, but if we are to get sufficient detail about our future partnership, we need to act now. We have made a significant move: it is for the EU now to respond in the same spirit.

I do not agree with your characterisation of the policy we agreed at Cabinet on Friday.

Parliament will decide whether or not to back the deal the Government negotiates, but that deal will undoubtedly mean the returning of powers from Brussels to the United Kingdom.

The direct effect of EU law will end when we leave the EU. Where the UK chooses to apply a common rulebook, each rule will have to be agreed by Parliament.

Choosing not to sign up to certain rules would lead to consequences for market access, security co-operation or the frictionless border, but that decision will rest with our sovereign Parliament, which will have a lock on whether to incorporate those rules into the UK legal order.

I am sorry that the Government will not have the benefit of your continued expertise and counsel as we secure this deal and complete the process of leaving the EU, but I would like to thank you warmly for everything you have done over the past two years as Secretary of State to shape our departure from the EU, and the new role the UK will forge on the world stage as an independent, self-governing nation once again.

You returned to Government after nineteen years to lead an entirely new Department responsible for a vital, complex, and unprecedented task.

These landmark Acts, and what they will do, stand as testament to your work and our commitment to honouring the result of the referendum.