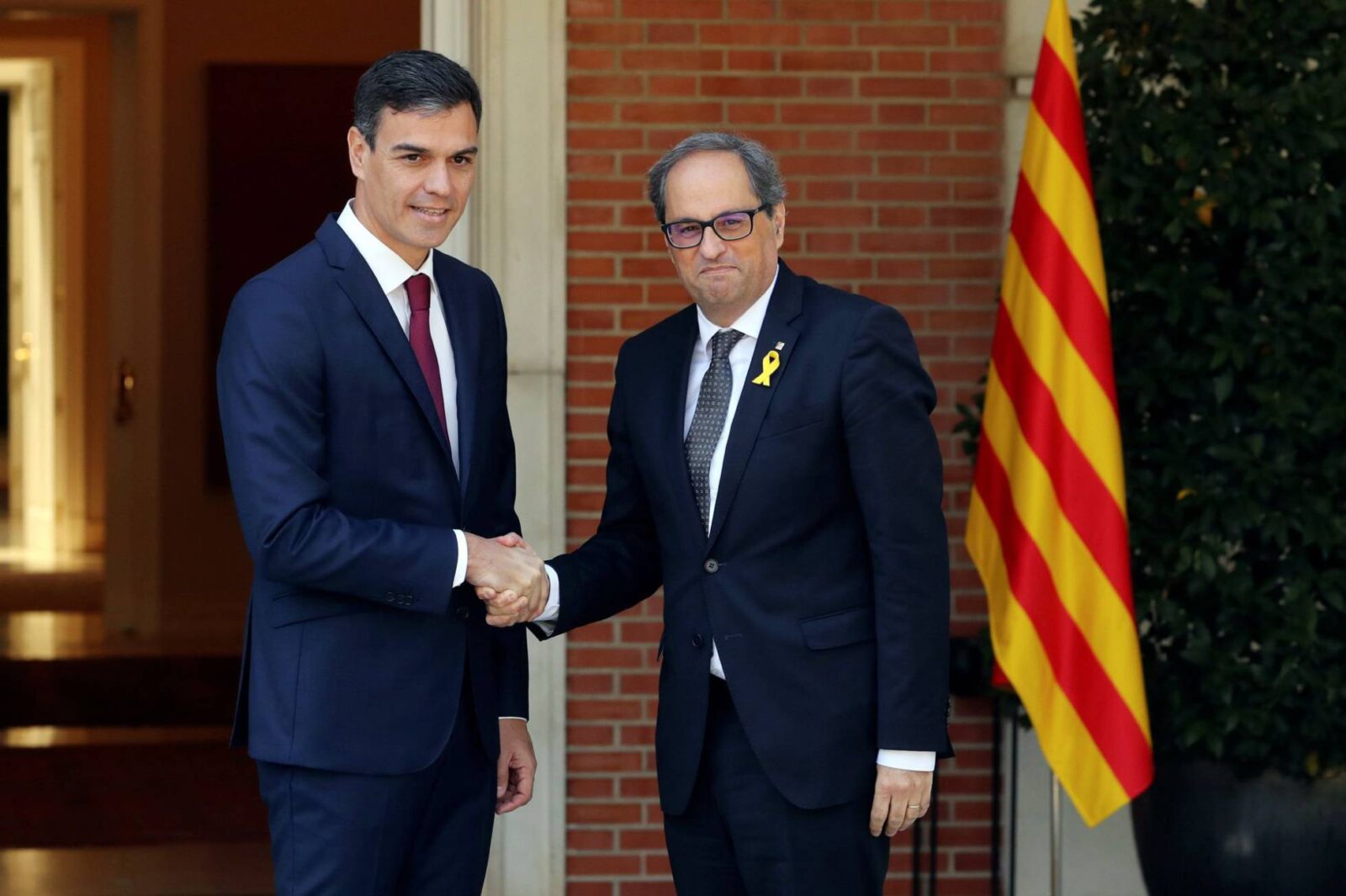 Aides to Pedro Sánchez and Quim Torra admit that the path to a long-lasting collaboration is fraught with difficulties.

It is the first time in two years that a Catalan government leader has come to La Moncloa, the seat of the Spanish executive in Madrid.

The last such meeting held there was between Mariano Rajoy and Carles Puigdemont; the former was recently unseated by a no-confidence motionand has retired from politics, while the latter fled Spain to avoid being tried for rebellion after leading a unilateral independence bid.

As the encounter started on Monday morning, Sánchez wrote on Twitter: “We begin the meeting focused on taking a step forward to return normality to Spain, with respect for the Constitution and the trust that institutional dialogue will open up channels of understanding.”

Following recent expressions of goodwill from both sides, the meeting will test the limits of the current leaders’ commitment to dialogue. Sources at both executives admitted that the path toward a loyal and long-lasting collaboration is fraught with difficulty. And there is opposition to the talks among political parties across the ideological spectrum.

Before leaving for the capital, Torra wrote on Twitter: “Going to Madrid to explain to [Pedro] Sanchez Castejón the extremely serious situation the Spanish state has created in Catalonia. And to willingly listen to the solution he proposes.”

Torra is asking for a Scottish-like referendum, but Sánchez is not open to that option

Sánchez, of the Spanish Socialist Party (PSOE), has said that he is ready to consider further power transfers and investment in Catalonia, but is insisting on an agenda that will “take all Catalans into account,” not just those in favor of independence.

Meanwhile, Torra, who was handpicked by Puigdemont as his successor, continues to publicly defend the outcome of the illegal referendum of October 1 and the right to self-determination through a referendum similar to the one held in Scotland in 2014.

At his last address inside the Catalan parliament, Torra compared Catalonia with Scotland and called for the same kind of negotiated referendum that ultimately ruled out independence for the UK nation “We expect the same reply that [then-British Prime Mininster] David Cameron offered,” said Torra.

Sánchez is not open to this possibility, but sources at La Moncloa said there is still room left to win back some of the 47.7% of voters who cast their ballots for separatist parties at the regional election of December 21. Sánchez will insist that his own agenda is meant “for all Catalans,” not just a few.

The Catalan executive says that Sánchez is mistaken if he thinks that promises of new investment will be enough.

Torra is expected to suggest that specific issues of an economic and social nature, such as improved financing and power transfers over railroad and airport facilities, be addressed by dedicated committees and bilateral forums. The separatist parties Together for Catalonia (JxC) and Catalan Republican Left (ERC) said that even though there is no Catalan state yet, running day-to-day affairs in this way would be good because it constitutes “making a republic.”

There is considerable opposition to the Sánchez-Torra meeting among parties with very different agendas. Center-right party Ciudadanos, which strongly opposes the secessionist movement, has asked the Spanish PM to cancel the meeting until Torra “rectifies” and “drops his intention” to declare Catalan independence, in the words of deputy Fernando del Páramo. And Madrid regional premier Ángel Garrido, of the conservative Popular Party (PP), thinks the meeting is “a mistake” because the Catalan government is “run by fanatics” and nobody should “make concessions to diehards.”

Meanwhile, the far-left, pro-independence CUP party in Catalonia sees the trip to Madrid as a waste of time: “Talking with someone who does not accept the right to self-determination is a contaminated dialogue,” they say.

Spanish government spokesperson Isabel Celaá said that holding talks is one thing, and demanding respect for the law another. None of the two sides would say whether the former will still be possible if the latter is not respected.