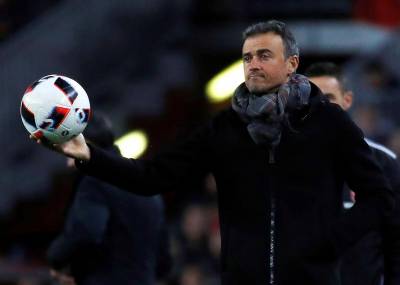 FORMER manager and player of FC Barcelona, Luis Enrique Martínez, has been chosen as new national team trainer after Fernando Hierro announced his departure yesterday barely a month into the role.

Martínez, whose plans for the team include ‘complete modernisation’ and ‘a hard line’, was the only candidate to be contacted by the Royal Spanish Football Federation (RFEF)’s chairman Luis Rubiales, who came under fire in early June for sacking national trainer Julen Lopetegui just two days before the World Cup started and with the whole team already in Russia.

His first task will be getting Spain through the League of Nations, which the Group 4 League A team will start on September 8 in the UK against England before playing on September 11 in Elche, Alicante province, against Croatia.

Luis Enrique has no recision clause in his contract – if he wishes to leave the job, he will be required to inform the RFEF first, according to Rubiales.

The firing of Lopetegui was as a result of Rubiales’ annoyance at the national team manager’s having signed up to lead Real Madrid, in place of outgoing Zinedine ‘Zizou’ Zidane, and the club’s leaking the information just before the start of the World Cup.

The RFEF had only found out hours before the appointment was announced, which upset Rubiales and led to his unilateral decision to sack Lopetegui on the spot rather than waiting for him to finish the World Cup before leaving as he had planned.

Long-term sporting director for the RFEF Fernando Hierro was picked as his replacement, but his lack of experience in leading a national team, combined with the daunting task of supporting Spain through its biggest global challenge with only 48 hours to get to know the players, led to decisions and indecisions that have been blamed for Spain’s losing to Russia on penalties, drawing with fellow Group B members Morocco and Portugal, and winning just one match – against Iran – with a single goal.

Rubiales has also been blamed for leaving the team on a cliff-edge and unsettling players, who were not performing at their best.