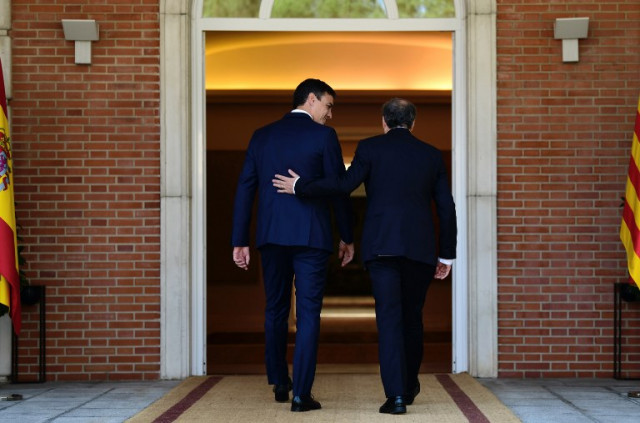 Catalonia is not “giving up” on independence, regional separatist president Quim Torra said Monday after meeting Spain’s Pedro Sanchez for the first time, although both agreed to keep talking to ease tensions.

The talks, the first between a Spanish prime minister and a Catalan president in more than two years, lasted more than two hours as both sides sought to defuse tensions after last year’s failed secession attempt sparked a major political crisis.

Speaking to reporters, Spain’s deputy prime minister Carmen Calvo described the meeting as “truly useful”, saying Sanchez and Torra had “agreed to re-establish a bilateral commission” that used to serve as a place for dialogue but was dropped by the previous conservative government.

They would also set up “work commissions” to discuss issues as diverse as work, energy, poverty, healthcare and education, she said, indicating the pair would meet again in Barcelona.

And as a sign of goodwill, Madrid would also consider lifting a previous conservative veto on several laws passed by the regional parliament – one of Torra’s demands.

But on the issue of independence, Madrid wouldn’t budge.

“There is little to say about this issue,” she said.

For his part, Torra said his separatist executive was not “giving up on any path to independence.”

“Catalonia’s right to self-determination must be respected for any political solution to take place.”

Sanchez overthrew his conservative predecessor Mariano Rajoy in a key parliamentary vote last month that he won with the help of Catalan separatist lawmakers.

At the start of July, six of the nine Catalan leaders being held near Madrid over their role in last year’s independence drive were transferred to Catalonia, in a sign of appeasement.

Accused of rebellion along with deposed, self-exiled Catalan leader Carles Puigdemont for their role in the region’s proclamation of independence, they face up to 25 years in jail.

Catalonia’s separatist government pushed ahead with an independence referendum on October 1 despite it being ruled unconstitutional by the court and Spain’s central government.

At the time, separatist authorities said 92 percent of the 2.2 million Catalans who cast their ballot — 43 percent of eligible voters — opted for independence.

The referendum was followed by a unilateral declaration on independence on October 27.

Rajoy’s government responded by sacking the Catalan administration, suspending its parliament and imposing direct rule over the wealthy northeastern region.

That only ended last month after Torra’s new administration was sworn in.

Catalan lawmaker Meritxell Batet, who was recently appointed as Spain’s minister for public administration and will represent Madrid in the bilateral commission, said the ruling Socialists wanted to amend the constitution to move toward a “federal model”.

However, with only 84 deputies in the 350-member house, the Socialists have little room for manoeuvre.

Amending Spain’s constitution requires a two-thirds majority within the Congress of Deputies.

Sanchez “will not launch anything that is too complicated for such a minority party”, said Fernando Vallespin, a political scientist at the Autonomous University of Madrid.

“There’s no majority in Spain for an amendment of the constitution. The right can block it.”

Sanchez has urged Catalan separatist leaders to “turn the page”