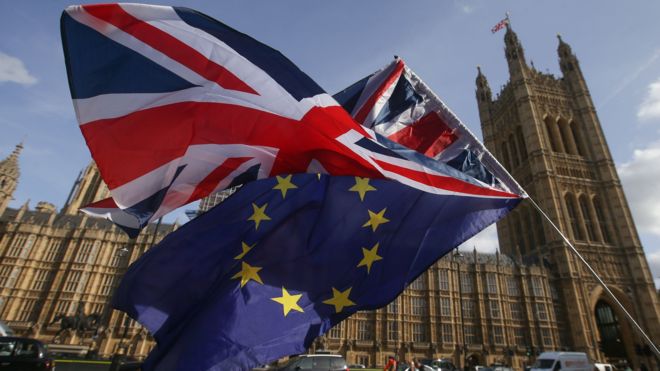 A former Conservative leader has warned Eurosceptics could “endanger everything they’re trying to achieve” if they vote down Theresa May’s Brexit plans.

Lord Hague said the proposals agreed at Chequers were “the most that can be achieved within the inevitable and inescapable constraints”.

Being a “romantic on this issue” was “an indulgence not a policy”, he told colleagues.

The foreign and Brexit secretaries have both quit over the plans.

The resignations of David Davis and Boris Johnson – who said they could not support Mrs May’s proposed trading relationship with the EU – have piled pressure on the PM and prompted speculation about a leadership challenge.

But one Brexiteer Tory MP played down the speculation.

The UK is due to leave the European Union on 29 March 2019, but the two sides have yet to agree how trade will work between the UK and the EU after that.

The delay has been partly blamed on deep disagreements within the Conservative Party over what shape Brexit should take.

This has focused on whether the UK should prioritise business interests and keep a close relationship with the EU in order to maintain trade links – which critics say will mean the UK still abiding by EU rules and leaving “in name only”.

In a sign of the dissatisfaction in Tory ranks, MP Henry Smith announced on Twitter he had refused an invitation to watch England’s World Cup semi-final clash with Croatia at 10 Downing Street because the prime minister “isn’t bringing Brexit home”.

And the former adviser to Mr Davis, Stewart Jackson, claimed there was a “plan” to curtail the role of the Brexit department and that Downing Street had blocked his reappointment under new Brexit Secretary Dominic Raab.

In the House of Commons, Labour’s Emily Thornberry – standing in for Jeremy Corbyn at Prime Minister’s Questions – said the Chequers agreement was a “dog’s Brexit” that would “satisfy no-one”.

Mrs May’s deputy David Lidington urged Labour to “work in the common interest instead of carping from the sidelines”.

The strategy announced after Friday’s meeting at the PM’s Chequers country retreat came after months of cabinet divisions.

More details will be set out on Thursday of the proposed model, which has yet to be negotiated with the EU, but it would see the UK agreeing a “common rulebook” with the EU for trading in goods, in an attempt to minimise friction for trade at borders.

Critics say it will leave the UK tied closely to EU rules and prevent it from striking its own trade deals in years to come.

But Lord Hague said it was the best available option.

Speaking on BBC Radio 4’s Today programme, he said the balance of the House of Commons was a “limiting factor” to what the UK could propose, as was the need of business for frictionless trade across borders.

And the need to avoid a hard border between Northern Ireland and the Republic of Ireland – which is part of the EU – are not an “inconvenient detail, it’s a fundamental part of ending centuries of conflict in the British Isles”, he said.

Following Mr Johnson and Mr Davis’s resignations, two deputy chairmen of the Conservatives – Ben Bradley and Maria Caulfield – quit their posts on Tuesday, claiming the PM’s proposals would not harness the benefits of Brexit.

Lord Hague, who despite being a Eurosceptic backed a Remain vote in the 2016 referendum, said that if MPs voted down the UK’s final deal with the EU, “that’s the point at which they’re going to endanger everything they’re trying to achieve”.

This could mean Brexit being delayed, a change of government or a second referendum, he said.

In a Daily Telegraph article, he added: “Being a romantic on this issue is all very well but is of no practical use to the country. It is an indulgence not a policy.”

Theresa May defended her plans as she arrived at a Nato summit in Brussels, saying it had been agreed by the government and “delivers on the vote that people gave on Brexit”.

“We deliver that Brexit and we do it in a way that protects jobs and livelihoods and meets our commitment to Northern Ireland,” she added.